‘Called to go to Haiti’ 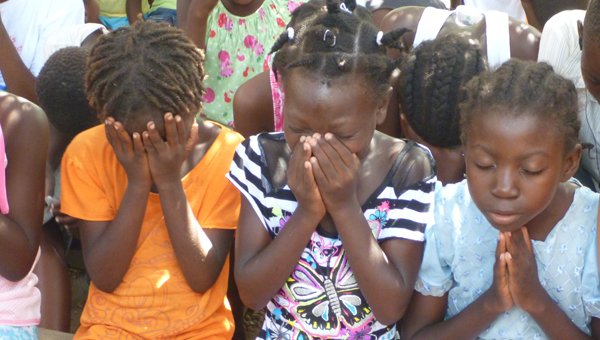 Karen Smith of Suffolk holds a child who was brought to a first-aid clinic in the “Fishing Village” of the coastal town of Montrouis, Haiti, during a mission trip she and 25 others, including a large contingent from Suffolk, concluded on Thursday. The Fishing Village is one of the poorest neighborhoods in the town of 20,000 or so people.

Early Friday morning, 26 people, including a large contingent from Suffolk, returned from a weeklong mission trip to Haiti, the first major effort on behalf of the Haitian people by a ministry founded by a Suffolk pastor.

Supply and Multiply was founded by Pastor Chris Surber of Cypress Chapel Christian Church and his wife Christina, who will be moving to the town of Montrouis, Haiti, with their four children early next year.

They have been on several mission trips to the nation — the poorest in the Western Hemisphere — in the past couple of years, but this is the first time they’ve taken a group with them. 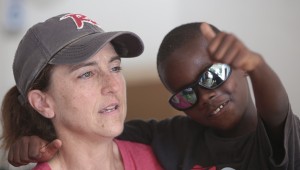 Karen Smith of Suffolk holds a child who was brought to a first-aid clinic in the “Fishing Village” of the coastal town of Montrouis, Haiti, during a mission trip she and 25 others, including a large contingent from Suffolk, concluded on Thursday. The Fishing Village is one of the poorest neighborhoods in the town of 20,000 or so people.

“Supply and Multiply exists to bring the Gospel to Haiti primarily through pastoral nurture to missionaries, indigenous church development and leadership training, and family discipleship to the glory of God,” according to the mission statement on its website.

Karen Smith of Suffolk, a member of Cypress Chapel and a program director at the Virginia Department of Transportation, joined the group of short-term missionaries, along with her 19-year-old daughter, Morgan, after hearing the Surbers talk about the people of Montrouis and what they’ve seen God doing in the poverty of that place.

In some ways, she said Friday, it was an answer to a yearning for a challenge that she once had sought to satisfy by attempting to become a contestant on the hit television show, “Survivor.”

“I’ve always wanted to be on the show,” she said. “I even stood in line at Greenbrier one time and did a three-minute video and filled out an application. But then I was thinking, ‘What good is that? I don’t want fame and fortune; I want to do it as a challenge, so why not do it as God’s work?’ I was thinking I’m called to go to Haiti, not called to be on ‘Survivor.’”

After spending a week in the Caribbean nation, she said, she came back a different person.

“I challenge anybody to go for a week just to serve, just to experience the need,” she said. “It transforms your heart. You can’t help but be transformed. The kids seemed to be starved for attention. You’d go back to the same place a couple of days later, and you’d have the same child wanting to hold your hand. It broke all cultural barriers, and it was (both) ways.”

Her daughter had a similar experience.

“When I was in Haiti I could feel so much love from the kids and moms on the Hill (an especially poor community, where the team conducted Bible and hygiene classes for mothers and children and provided water, clothes, eating utensils and hundreds of pounds of other supplies),” Morgan Smith said.

“They were happy we were there to help them and to just spend time with them. It didn’t matter if we had board games or a big television. All we needed was bubbles and a few Frisbees, and they were free to play with each other and us.”

Members of the mission team came from churches in Suffolk, Portsmouth, Gates, N.C., and Illinois.

In addition to spending time on the Hill, they conducted a vacation Bible school for children at The Agape House, an orphanage in Montrouis; they conducted a four-day training seminar for pastors and other church leaders from the region; they held a two-day first-aid clinic for people without access to medical care; and they baptized more than 30 Haitian women and children in the waters of the Atlantic Ocean. Four American children who went on the trip also were baptized.

“I’m glad I got this chance to go,” Morgan Smith stated in an email. “I would gladly go back with more money and help out more of the moms with meals and clothes for their children. I cannot express how much something so small can mean to these people who have barely anything.”