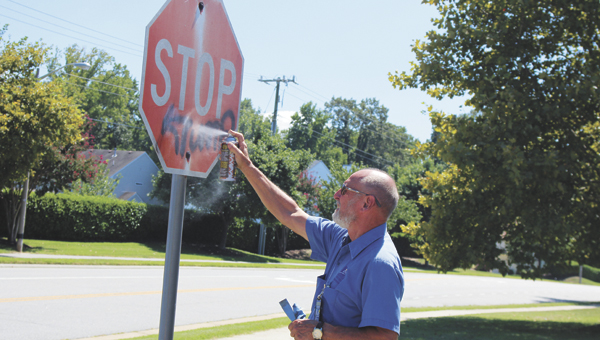 Lon Grovesteen, a school district employee in the maintenance department, removes graffiti from a street sign at Northern Shores Elementary School on Tuesday. Vandals spray painted obscenities in the playground and, besides the stop sign, also tagged the dolphin statue outside the front entrance.

At Northern Shores Elementary School on Tuesday, a school district employee in the maintenance department removed graffiti — some of it obscene — before next week’s first day of school.

The school mascot dolphin statue outside the front entrance and a stop sign were also tagged, according to Moore.

“I notified the police department so they could file a report,” Moore said.

The surrounding Burbage Grant neighborhood is “very good” at watching out for crime, she said.

“We are assuming it happened over the weekend,” Moore said, because custodians cutting the grass before the weekend had not noticed anything.

In the playground, the picnic table and the slides were sprayed. It appeared the word “stump” was sprayed on the stop sign.

When a reporter visited shortly after 2 p.m. Tuesday, maintenance worker Lon Grovesteen had already removed graffiti from the dolphin statue and playground.

Moore said it was the first graffiti attack in her five years at the school. “It was a shock,” she said.

“We are a public facility, and certainly, off-hours, they are free to use the playground and the equipment. On the weekend, sometimes it becomes a hangout and is not used appropriately.”

Suffolk spokeswoman Diana Klink stated that a police officer responded to investigate the vandalism at about 3 p.m. Monday.

“Once on scene, the officer found several pieces of playground equipment and a stop sign at the entrance of the school were vandalized with silver/gold metallic spray paint,” Klink wrote in an email.

“There were no witnesses and there are no known suspects at this time.”

School district maintenance workers arrived at 8 a.m. Tuesday to assess the damage and determine what needed to be done, according to Moore.

“The positive thing is that our community stakeholders are a big part of us, and we want to make sure things are taken care of for when our students return.

According to Klink, other incidents in the area within about the last month also involved gold and silver spray paint.