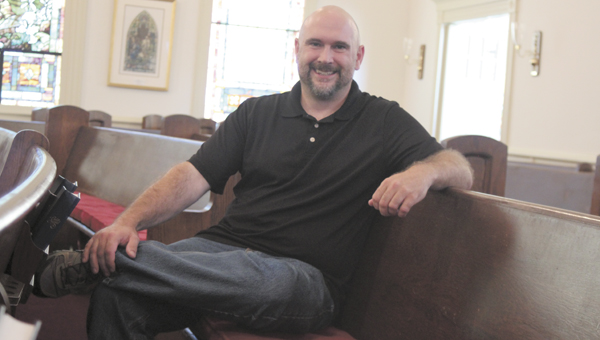 Jason Stump, director of Christian education at Oakland United Christian, sits in the church sanctuary, which is open to the public for private reflection and prayer on Wednesday mornings after he initiated the concept there.

Like most others, the sanctuary at Oakland United Christian Church is a peaceful place that encourages reflection and quiet prayer.

While cars and trucks bustle up and down on Godwin Boulevard, it’s calm and peaceful inside the sanctuary, where the man for whom the road was named — the late Virginia governor Mills Godwin Jr., one of Chuckatuck’s most famous sons — worshipped.

The church has recently begun opening its sanctuary to the general public for private prayer and reflection every Wednesday morning, between 5:30 and 8:30 a.m.

Jason Stump, its director of Christian education and a seminary student, says the church has lately been looking at how it can serve the community in new and unique ways, “rather than the same old.”

Stump said he brought the idea for Wednesday mornings to the pastor and executive committee after discovering something similar at another church.

This week is the fourth Wednesday the concept has been put into action at Oakland UCC. Stump said the church has been “very intentional” in advertising the concept using the word “all.”

Last Wednesday, one visitor told him she had been driving by the sign outside the church and the word “all” had stuck in her mind, Stump said.

“She doesn’t currently go to church, but faith is a big part of her life,” he said. “Last week she decided to act upon that. Not only did she pray, but her and myself and another church member had a great conversation and really found out what she was dealing with in life.”

But there’s no pressure to discuss issues of spirituality or do anything, Stump says. Folks might read, he said, be it the Bible or whatever novel they’re working on.

Godwin Boulevard is a busy commuter route, Stump observed. People come from all the way down in North Carolina, and folks travel to the packing plant in Smithfield, the shipyard in Newport News, Planters Peanuts, Lipton and many other workplaces — schools included.

“I’m a former school teacher, so I know they are going through tough times,” Stump said. “This could be a good place for them to gather of a morning. The time seems a little early, but there’s traffic on the road at 5:30.”