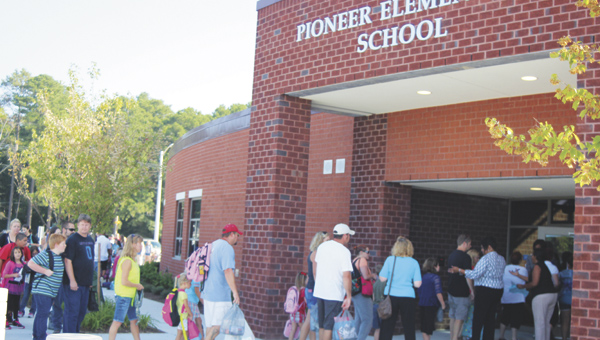 Parents and students line up at the front entrance of Pioneer Elementary School to learn which classroom and teacher children are assigned to.

Media specialist Deborah Haring expressed her admiration for his new shoes, which sported large stars that light up when he walks.

“They are new shoes for a new school — perfect!” exclaimed the educator who, like most others at the new school, came across from the old Southwestern Elementary School.

Staff, parents and students had mostly only praise for the new school Tuesday. Getting it ready in time has “been a lot of hard work, but it’s absolutely beautiful,” Haring said.

Two concerns expressed by some, however, were parking and the fact that orientation was rescheduled for after the first day to allow more time for some of the new building’s final touches before classes began.

“What good does it do” to hold orientation after students arrive for the new school year, asked Brenda Heiselt, waiting in line outside the front entrance about a half-hour before first bell with scores of other parents.

“The kids are a little nervous about where to go, where the lunchroom is.”

But Matt Heiselt said, “Kids are resilient. They will figure it out.”

For Ricky Bolton, there with wife Danielle Bolton to drop off Ricky Bolton III for his first day of kindergarten, the difference between the new school and the old Southwestern Elementary was significant.

“It’s a big improvement,” Bolton said. “It’s something good that the city has done, because the population is getting bigger and bigger every year.”

But he added, “They need more parking — and a playground — but I’m sure they are bringing that.”

Inside, principal Chris Phillips stationed himself in the foyer to answer questions and point folks in the right direction. And he was kept busy.

After accepting a new principal position in Alexandria, Phillips will be departing Suffolk in three weeks.

“It’s very bitter sweet,” said Phillips, who was also the principal at Southwestern, citing his connection to the community.

“It will be very sad to go — it’s going to be a sad day. It was hard for me to tell all my staff — telling my kids is going to be even harder.”

But Phillips’ departure wasn’t the big story Tuesday; that title was held by the first instructional day ever at the city’s newest educational facility.

Second-grade teacher Brenda Mills had been at the old Southwestern since it became an elementary school. “This is my first new environment, and I’m loving it,” she said.

Terry Napier, the district’s facilities and planning director, said contractors worked through Saturday to get the school ready. “Most of that was floor cleaning, not construction work,” he said, adding that the contractor has a “punch list” of minor things to finish up after school hours.

The number of parking spaces accorded with city requirements, according to Napier. “We are not sure at this stage how we are going to handle additional parking,” he said, adding it wasn’t a problem unique to Pioneer for the first day back.

It didn’t take long for a rhythm to begin to settle on Pioneer Elementary. Parents began leaving — some a little teary-eyed — and teachers stood in front of their classrooms welcoming the last of their new students.