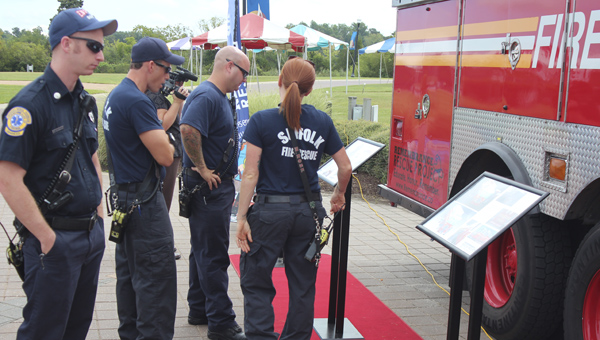 A restored fire truck that responded to the Sept. 11, 2001, attack on the World Trade Center in New York both educated and provoked remembrance when it visited Suffolk on Friday.

Rescue 4 is one of two New York fire department trucks purchased and restored by a group of retired firefighters to travel the country reminding and educating Americans about the al-Qaeda attacks that claimed more than 3,000 lives. 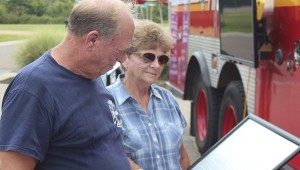 Leon Olsen, a retired firefighter from the suburbs of Chicago, visited the traveling memorial in Suffolk with his sister, Sharon Stitt of Newport News. “It kind of chokes me up,” Olsen said.

“I remember it, but I don’t remember it on the scale that other people do — especially other firemen” at the time, Wills said.

Young people often have heard about the attacks but “don’t know the true effects,” he said.

“It’s important for people to understand the true meaning of what happened that day; not only a horrific attack like that, but also the first-responders, what they did.”

Scores of Suffolk first-responders came to see the truck. Suffolk Fire and Rescue Chief Cedric Scott said he encouraged them to do so.

“It’s just unreal to be able to actually see it.”

Newport News Fire and Rescue’s William Venezia, who helped coordinate the truck’s visit to Hampton Roads, said the bodies of the some of the eight crewmembers on Rescue 4 “weren’t even recovered.” 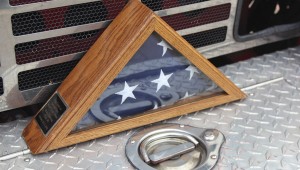 Also part of the traveling memorial was an American flag flown from a truck provided by Musco Lighting Team to illuminate Ground Zero during the long recovery and clean up.

In fact, he added, only one firefighter survived from Rescue 1, 2, 3, 4 and 5. Trucks 1 and 2 were destroyed; 3 and 5 were damaged but were able to be repaired; and Rescue 4, which suffered the least damage, continued serving New York for about a year after the towers collapsed, he said.

Another artifact in the exhibition is an American flag that flew from a truck as it illuminated Ground Zero during the recovery and clean up. It’s one of 100 remaining flags from Musco Lighting Team trucks that were dispatched to New York and the Pentagon.

The memorial was especially moving for brother and sister Leon Olsen and Sharon Stitt, Olsen was a firefighter in the suburbs of Chicago for 34 years, and Stitt lost her husband, and she suffered a broken neck, when a speeding drunk driver lost control and crashed into her Newport News home.

“It kind of chokes me up,” Olsen said. “We are all brothers, even though we are thousands of miles away from each other.”

Stitt said she was living in California at the time of the attack. She and her husband were listening to the news when the second tower was hit.

They visited the crash site in Pennsylvania, and now she and her brother are planning to visit Ground Zero in two weeks.

Sept. 11 happened 13 years ago next Thursday, and Olsen believes it’s only a matter of time before another major attack on home soil.