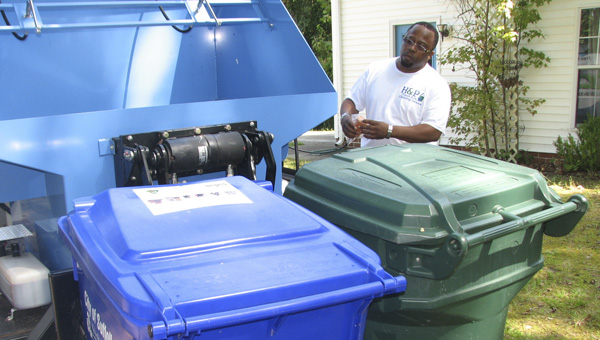 James Pullen demonstrates the machine he had custom-built for H&P Trash Bin Cleaning Service. The machine raises the cans and then power-washes them.

A Suffolk man and his business partner are breaking into an open market by providing a service they say isn’t available anywhere else in Virginia.

James Pullen and Valerie Jackson have started H&P Trash Bin Cleaning Service, which aims to find the residents and businesses that don’t have the time or the stomach for cleaning out the gunk that collects at the bottom of their trash receptacles.

“You have individuals that don’t want to clean their trash bins,” Pullen said. “Even if you put your trash in bags, sometimes the bags develop holes, fluids leak out and get to the bottom of the trash bin.”

A service-disabled veteran who’s four years from retiring from the U.S. Department of Labor, Pullen said he got the idea for the service on a trip to Florida, where he saw someone else with a similar business.

Although it’s a year-around business in Florida, “up here, you have to look at it as something seasonal, starting in March and ending in October,” he noted.

Pullen had a machine designed that he pulls on a trailer behind his pickup truck. Running on a generator, the machine lifts up to two residential trash bins at a time, sprays them inside and out with a spinning power-washer and deposits the dirty water into a holding tank, which is later taken to a wastewater facility for disposal.

“It’s about the economy and the environment,” Pullen said.

Although the machine can handle individual trash cans, Pullen expects many of his customers to be property managers and commercial businesses with larger receptacles.

“I would like to get with some of the property owners and bring this as a service to the community,” he said.

Jackson said the service also can help keep folks who use the trash bins healthy.

“Trash bins are a breeding ground for bacteria, germs and insect larva, all of which spread diseases,” Jackson wrote in an email. “I really feel this is something that every resident should want and appreciate.”