Momentous matches on the gridiron 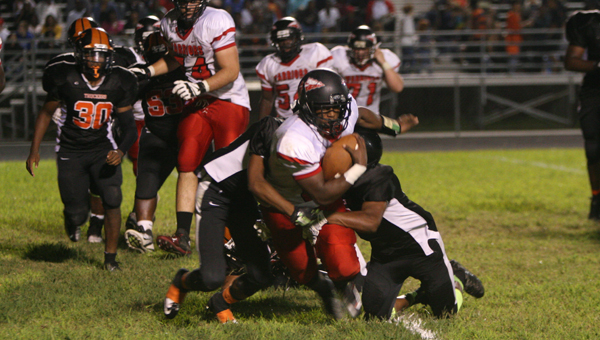 Nansemond River High School senior quarterback DeShon Saunders pushes for more yards, and he and the Warriors will look to push for another win tonight in their home opener.

The Nansemond River High School football team has established credibility with its road performances, and now it brings the show before the home crowd for the first time this season.

“I think everybody’s excited to play at home,” Warriors coach David Coccoli said. “We have a difficult task in front of us. Great Bridge (High School) is a heck of a football team.”

The Wildcats fell 33-27 to host Lakeland High School to start their season, but then rebounded last week with a 41-0 victory over visiting Granby High School.

“They’ve been known for their offense,” Coccoli said of the Wildcats, noting the speed with which they play. “We’ve got to match their intensity.”

Coccoli’s efforts with the Warriors’ offense have been focused on fixing the problems that caused it to produce only nine points over the course of five select trips inside Churchland High School’s 25-yard line last Friday.

In terms of an injury report, Coccoli said for being a couple games into the season, preceded by training camp, “We’re pretty healthy.”

King’s Fork High School’s football team has a special relationship with Grassfield High School. The Bulldogs achieved a breakthrough road win over the Grizzlies in 2012 that helped announce KF’s presence as a force in the Southeastern District.

Bulldogs coach Joe Jones said Grassfield is one of the opponents he and his team use to “kind of help measure where we are as a program.”

Last year, “we let one slip away,” Jones said. “We had a 14-point lead late in the third quarter and let them get back in it.”

This year’s Grizzlies are without two-way stars and leading rushers Vincent Lowe and Isaiah Harper, who now play for Old Dominion University, but they always have good athletes, Jones said.

Offensively, “they can go from kind of one extreme to the other,” Jones said, featuring, at times, a power run game, and, at others, a spread offense.

King’s Fork is healthy entering tonight’s contest against the Grizzlies, which are coming off a bye.

“I wish we had everybody healthy,” Saints coach Lew Johnston said.

“He had a partial (anterior cruciate ligament) tear and also a small fracture in the bone near his knee,” Johnston said. “It would just be a miracle if he got back.”

Other players will be back, but not necessarily immediately.

After undergoing surgery on his thumb, standout sophomore linebacker Ke’Shaun Moore will be out for at least another month, Johnston said.

While the Crusaders have lost players due to graduation, they still have senior quarterback Blake LaRussa and have added talented transfer student-athletes, including senior wide receiver George Wahee and senior running back Kevin Hicks from Norfolk Christian High School.

Lakeland High School returns to action from a bye that coach Bryan Potts said “gave us another week to focus on what our goals are,” while getting back to fundamentals.

The Cavaliers want to return to playoff competition, and the next stepping stone toward that goal comes tonight when they face Indian River High School, which is coming off two difficult games.

The Braves opened the season with a 28-13 loss to Hampton High School and then fell 46-7 to Oscar Smith High School.

Potts said, “We’ve got to get back something from last year — not really calling it revenge, but we feel like they got one from us.”

A healthy Lakeland team will be facing some familiar faces as junior linebacker Jaquan Yulee transferred to Indian River, and the Braves are now led by former Cavs coach Glenwood Ferebee.

“He does the same that he (did) when he was over here at Lakeland,” Potts said, noting the Braves will spread the ball out, offensively.