Stepping toward a cure 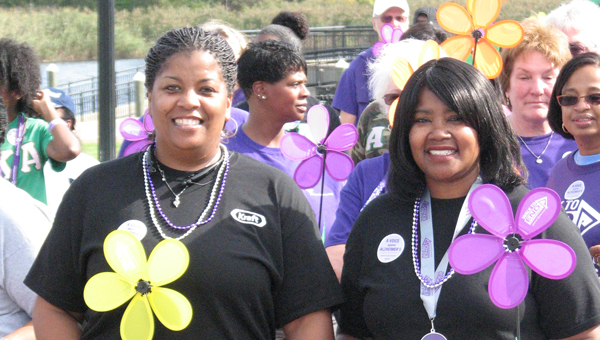 Alfreda Russell and Barbara Peterson, members of the Planters Peanuts team for the Walk to End Alzheimer’s, set off on the walk from Constant’s Wharf on Saturday morning. Walkers carried colored flowers representing their connections to Alzheimer’s — yellow meant the walker is supporting or caring for a loved one with the disease, and purple means the walker has lost a loved one.

Co-workers Barbara Peterson and Alfreda Russell unfortunately have more in common than just their jobs at Planters Peanuts.

“She doesn’t know who we are,” Peterson said. “She has her days where she acts like she knows you still.”

The two, as well as the rest of the Planters team and hundreds of others, participated in Saturday’s Walk to End Alzheimer’s, which started at Constant’s Wharf and wound along a few downtown streets.

Local participants have raised about $27,515 toward the $55,030 goal. Donations still can be made through the end of the year.

Mayor Linda T. Johnson was the honorary chairperson for the event. She described watching friends and neighbors struggle with the disease.

“I know what it means to lose someone to Alzheimer’s,” she said. “It’s just a really, really sad issue. One person every 67 seconds in America will be diagnosed with Alzheimer’s.”

Johnson also encouraged those in attendance to call their national elected officials and get them to direct more research money toward Alzheimer’s.

“The lowest amount of money and research is spent on Alzheimer’s,” she said. “That’s not acceptable. Let’s do the best we can to make Alzheimer’s end in this country.”

According to the Alzheimer’s Association, the disease is the sixth leading cause of death in the United States, and the fifth for those over 65. It kills more people than prostate cancer and breast cancer combined.

It’s the only cause of death among the top 10 in America that cannot be prevented, cured or slowed.

Gino Colombara, president and chief executive officer of the Alzheimer’s Association Southeastern Virginia Chapter, noted the huge financial toll the disease takes on the nation and on individual families, as well as the emotional cost to caregivers.

“The cost of Alzheimer’s is escalating into the hundreds of billions of dollars,” said Colombara, whose father had Alzheimer’s.

While five million in the United States are living with it, 15 million are acting as caregivers.

“We came here today because this disease has gone too far,” Colombara said.