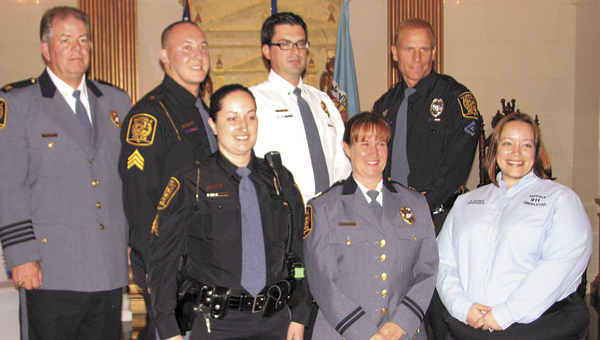 Seven promotions in the Suffolk Police Department took effect Sept. 1, and the department held a ceremony to celebrate them on Tuesday.

“This is such a milestone, not only for you individually but also for our city,” Mayor Linda T. Johnson said. “I am so proud of each of you for what you have accomplished. You are the best, and you prove it day in and day out.”

The promotees included Capt. Janet Brandsasse, only the second woman in the department to attain the rank of captain, according to Maj. Stephanie Burch — who, incidentally, was the first.

Brandsasse was hired by the department in 1995. She has since served as uniform patrol supervisor, a watch commander, a detective lieutenant and the unit commander for special investigations.

She now will be assigned as commander of the criminal investigations division. She retired from the U.S. Navy after more than 25 years of active and reserve service, having attained the enlisted rank of senior chief petty officer and the commissioned rank of lieutenant. She’s also a graduate of the FBI National Academy and Old Dominion University and earned her master’s degree in criminal justice from West Virginia University.

Lt. John McCarley was promoted at the ceremony in his absence. McCarley is deployed with the U.S. Air Force.

“We hope to see him back very soon,” Burch said.

McCarley was hired in 2002 and has served as a detective and a uniform patrol supervisor in addition to conducting internal affairs investigations. He now will be assigned as a watch commander in the second precinct.

Lt. Kevin Harrison was hired in 1997 and has served as a field training officer, background investigator, uniform patrol supervisor and the unit supervisor for Special Investigations. He now is assigned as a watch commander in the First Precinct.

Sgt. Jeffrey Lurie was hired in 2009. He has been assigned as a detective and handled property crimes, burglaries and economic crimes. He also held the ancillary positions of SWAT Operator and Command Bus Operator. He’s also an instructor and recently was awarded a Federal Instructor Training Certificate at the Center for Domestic Preparedness in Alabama. He is the recipient of the Suffolk Police Department’s Life Saving Award and Departmental Commendation. In 2011, he was recognized among the top enforcement officers for the National Highway Transportation Safety Administration’s “Click It or Ticket” campaign. He holds a bachelor’s degree in criminal justice and currently is pursuing his master’s degree in public administration. He has been appointed as a uniform patrol supervisor in the First Precinct.

Master Police Officer Paul Hutta was hired in 2003. He has served on the Neighborhood Enforcement Team and become certified as a bicycle officer. He’s an instructor and holds the ancillary positions of SWAT Operator and Search and Rescue Team member. He has received numerous Departmental Commendations. He will retain his assignment on the Neighborhood Enforcement Team.

Emergency Communications Operator Supervisor Erin Hughes was hired in 2000. She has trained many new dispatchers, assisted in the implementation of the city’s Reverse 911 initiatives and assisted with the development of the emergency medical dispatch program. She was instrumental in the establishment of the department’s Crisis Intervention Team and has received several Departmental Commendations and Noteworthy Performance Awards. She also volunteers with the CHKD North Suffolk Circle and the March of Dimes.