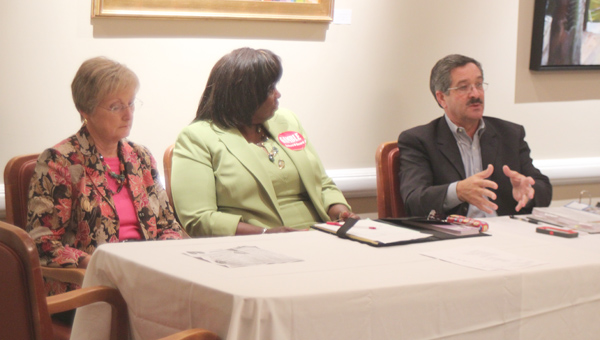 Candidates were asked to discuss their top priorities. After Duman touched on several city-specific issues, the local school system was front and center for the next 90-odd minutes.

Duman cited his failed motion to borrow from the city’s reserve to replace aging heating, ventilation and air-conditioning infrastructure in schools.

“Since I have been on council, the school debate has been rather contentious, to say the least,” Duman said.

Regarding an ongoing debate between the school district and the city over how much city funding schools receive compared to other Hampton Roads localities, Duman said, “You can pull numbers out of the sky. There’s a lot of numbers to look at. Some of the city representatives don’t feel the money is being spent wisely.”

Duman, who has initiated a task force with School Board and City Council representation to seek to work through the issues, said he is tired of the acrimony between the two entities.

“It’s obvious to anyone who has half a brain the two entities aren’t working together,” he said.

Duman said that while he knows mid-career teacher salaries are far from competitive, the division’s health coverage is the third-best in Hampton Roads. “It’s really not that far off in some ways,” he said of overall teacher compensation, and teachers are still coming into Suffolk public schools from other school divisions.

From the audience, Brent Haden noted Suffolk’s spending per student is the lowest in Hampton Roads, citing a state superintendent’s report.

“If you are at the bottom of the barrel for spending, you are not going to get the same kind of results as somewhere adequately funded,” Haden said, referencing some low standardized test scores and more than half of the city’s public schools missing full accreditation this year.

School Board member Linda Bouchard, who has served on the Pupil-Personnel Committee, lamented what she labeled “a pipeline directly from the schools to the prisons” — students repeatedly removed from their home schools and placed in alternative school Turlington Woods.

“There’s a high rate of recidivism,” she said, “Eventually, they end up getting expelled.”

She railed against out-of-school suspension. “We have more options,” she said.

“I believe children should be in school in the neighborhood where they live,” she said. “I believe we should take the school to the kids.”

Schools are “clearly not a priority for the city,” she said, citing city spending on new municipal buildings downtown.

Bouchard said she wants to continue pushing for cost-saving measures. “I have had a lot of pushback, but I’m going to keep pushing them for another four years, then I’m going to go home and be with my dogs,” she said.

Bouchard was critical of Superintendent Deran Whitney’s shakeup of senior administrative staff, which “essentially put another layer between him, principals and the students. I do think that’s a concern.”

Gamble spoke on a range of issues, including school safety, standardized testing and literacy.

“We need to launch a literacy campaign,” she said. “We really need to teach our children how to read before they leave third grade.”

And the board has become a rubberstamp for Whitney’s plans, according to Gamble. “I would have asked about these 32 new staff, when the teachers are suffering,” she said.

Asked what she thinks about the superintendent, Bouchard, noting she was not involved in hiring him, said she doesn’t agree with his vision for the school system.

“I believe he’s very, very hardworking,” she said. “I’m concerned that most of his background has been in elementary school education. I would say this, though: The buck stops with the people at the helm, which he is. If he doesn’t deliver, we are not going to renew his contract.”

Association member Wulf Berg jumped in, “I would get him in the office tomorrow morning and say exactly that — ‘You have got six months to straighten that out.’”

“I think he needs to be held accountable, and it’s the board’s fault,” Gamble said.

Paul Gottlieb, another Sleepy Lake resident, said, “When you all hire him, you can fire him. He serves at the pleasure of the School Board.”

Resident Wendy Hosick said Suffolk students “are our single most important asset. If we are not willing to invest in that asset, we can kiss it goodbye.”