Pilates turned on its head 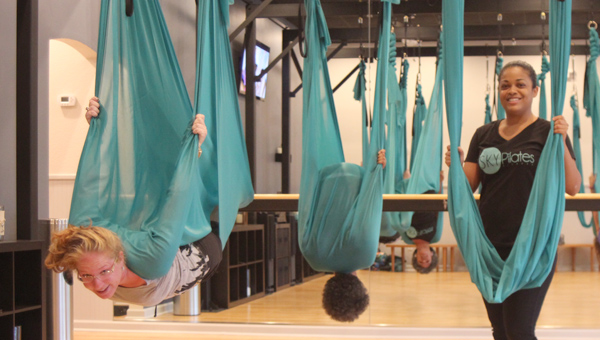 Jessica Gordon, who has opened an “aerial fitness” studio in Harbour View, supervises the acrobatic maneuvers of Colette Butler and Kimberly Jackson.

A new fitness studio opened in North Suffolk promises to build trim, taught bodies that more often than not are suspended upside down mid-air.

Fitness instructor Jessica Gordon, 26, who has been a familiar face at Suffolk Family YMCA, says she became switched on to “aerial fitness” earlier this year.

“I was online, and I was looking for a creative Pilates workout, and this was one of the first ones to pop up,” she said.

Before she opened Sky Pilates Fitness, suite A3 at 5860 Harbour View Blvd. — near Regal cinemas — no one else in Hampton Roads was doing aerial fitness, Gordon said. So, seven months ago, she traveled to North Carolina to try a class.

After dangling from the ceiling, she was hooked.

During workouts, the hammocks alleviate pressure on joints and muscles, she said, adding, “It completely takes the pressure off the spine.”

Besides enmeshing their bodies in one of eight silk hammocks hanging from ceiling — “sky Pilates,” Gordon calls this — clients can also calm their minds by partaking in “sky Zen.”

“It combined the meditative quality of yoga with a workout component you find in a Pilates class,” Gordon said.

Those are the two main fitness threads offered at the studio, but its website lists 14 different types of classes, working various regions of the body and also aimed at various client types, such as seniors, females-only, and beginners of both genders.

Gordon says she followed through on a New Year resolution by opening the studio. “I started putting forth the idea in February,” she said. “It took a little longer than anticipated, but it finally happened.”

Taking the plunge was “very scary,” she said, but “you get to a point where you just have to listen to your calling.”

The studio opened to the public Saturday for enrollments and package purchases. Prices and other details are at www.skypilatesfitness.com

Gordon pointed out that aerial fitness is a workout for those not afraid of heights.

The steel frame supporting hammocks is engineer-designed, and a local contracting firm did the installation, she said.

“All the hardware came from an acrobatics company based in Los Angeles,” she said, adding that each hammock supports up to 300 pounds. “It’s very heavy-duty.”