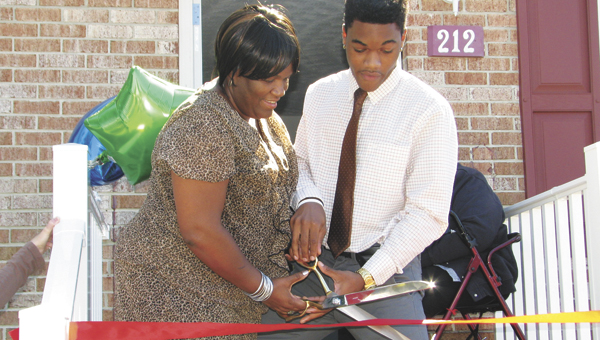 Malika Traynham and her son, Qudree Willis, cut the ribbon at their new home on Saturday.

The road to homeownership has been an unexpectedly long one for Malika Traynham, but she finally is nearing the end of it following the Saturday dedication of her new home on Locust Street.

Habitat for Humanity started working on the home about a year ago. It was a foreclosure the group bought from Bank of America for $3,000.

It took more work than the group originally thought. Traynham moved out of her former rental in February, thinking the house would be done soon.

“On a scale of one to 10, this was probably a seven in terms of rehab,” Lavender said. “It took us longer than we thought.”

In the meantime, Traynham, the mother of four grown children, moved from place to place.

“I have wonderful friends, family and even co-workers,” she said. “It’s not easy to share your space with someone, but they did so graciously. Now I have a space I can share with them.”

Traynham’s youngest two children are in college. Of the older two, one is married and the other is in the military. Some have asked her why she’s buying a house now, with all of her children out of it.

“It’s about having a home for them to come back to,” she said. “This could be theirs one day.”

Saturday’s dedication included about 50 family and friends along with prayer, singing “This Little Light of Mine” and food.

Traynham and her family put in about 350 hours of what Habitat for Humanity calls “sweat equity,” helping to build their own home and other Habitat homes.

In addition, Traynham had to demonstrate an ability to pay the no-interest mortgage on the home, the money from which will be put back into Habitat’s building program. Habitat families have to complete financial literacy training, demonstrate a need for adequate shelter and meet income requirements.

“It enables people who wouldn’t otherwise be able to participate in the American dream to own their own home,” Lavender said.

Traynham’s home had a celebrity guest volunteer back in February, when Jacksonville Jaguars linebacker LaRoy Reynolds, a Norfolk native, along with his father, came to put some of his own sweat into the project.

The home was one of 12 rehab and eight new houses across South Hampton Roads the organization plans to complete this year.

That does not include a separate nine new houses in Suffolk off White Marsh Road, where Lavender said construction likely will begin by the end of November, possibly sooner.