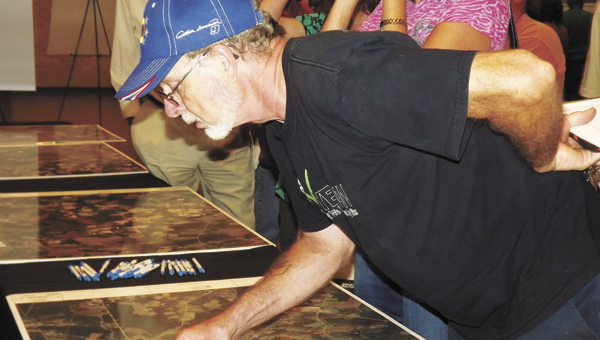 David Brotherton locates where he and his wife, Michelle, live on Benton Road in Suffolk during a public information session in Franklin on Thursday regarding the Atlantic Coast Pipeline.

A sample of people attending an open house in Franklin on Thursday for the proposed Atlantic Coast Pipeline gave a mixture of reactions and concerns about the project.

Thirteen such meetings have been scheduled for landowners and the general public to sound off about the large project. Suffolk and Western Tidewater got their turn at the Regional Development Workforce Center at Paul D. Camp Community College in Franklin.

Tables were set up with enlarged satellite maps showing where the pipeline would run in relation to homes, farms and timberland. Around each, individuals, couples and clusters of residents in Suffolk, Southampton County and beyond studied the maps and wondered aloud what the pipeline could mean for them.

Michelle and David Brotherton went to the meeting from their home near Route 13 in Suffolk.

A couple of their concerns about the pipeline are safety and the environment.

“We don’t really know what to expect,” David said. “Is it safe? Will it be above or below ground?”

Michelle wondered about how wildlife could be affected, noting that quail are moving back into the area. “That concerns us.”

He also said he didn’t give permission to surveyors, “but they did it anyway.”

Also from Suffolk was Kenneth Worrell of Quince Road. Standing beside Vinson Huneycutt of Southampton County, he wondered why the pipeline couldn’t follow the power lines.

Huneycutt, who lives on South Quay Road, said the pipeline would go through the middle of his property but wouldn’t have a big adverse effect on him.

Delores and Horace Holley came from their home in Newsoms and extensively studied the maps showing where the pipeline could be set.

“We’re concerned how close we could be to the pipeline. Right now, as far as we can tell from the map it’s not going to be on our land,” Horace said. “But how will we live (with) the work? And what about erosion?”

He added that he would have preferred a more structured session on the issue, such as a town hall meeting where everyone’s opinions could be heard at one time.

“We just don’t want it,” Jessie and Horace Edwards agreed. “They’ll take the timber and tear up the farmland … tear it all down.”

The couple, who live in Branchville, see no personal benefit to the project.

David Darden, also of Branchville, pointed to one of the satellite images that included his property. The pipeline could go across some of the farmland that he leases. He said he was told there would be compensation for any disruption to cotton and soybean farming.

“I’m against where it is,” Wulf said, explaining that military helicopters and planes already use a nearby area for target practice. He fears that an accident in the air could have disastrous consequences.

“They could easily come down on the pipeline,” he said. “The pipeline is too close to the vicinity.”

He added that how the environment could be affected is another of his concerns.

Jim Norvelle, director of communications for Dominion Energy, was among the company representatives.

He anticipates there’ll be “a lot of give-and-take” about where the pipeline would ultimately be set if approved.

“We’re working with our land agents, and we want the best route with the least impact,” Norvelle said.

“It’s important to hear from landowners and stakeholders to share issues we might not even be aware of.”

Wade said the pipeline will be buried. There will be three compressor stations, one at the point of origin in West Virginia, one in Buckingham County and another in North Carolina. There would also be what he called “some innocuous measuring stations” along the way.

To learn more about the pipeline, landowners can call toll-free at 1-888-895-8716; for general questions, 1-844-215-1819. The email address is ACpipeline@dom.com, and there’s also a Facebook page at Dominion Atlantic Coast Pipeline.