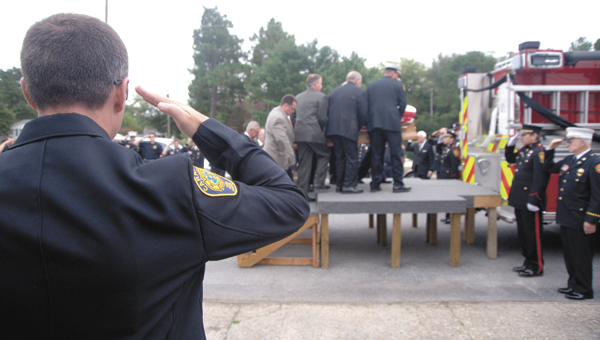 Above, firefighters salute as the casket of William G. “Jerry” Saunders is loaded onto Engine 29 of Chuckatuck Volunteer Fire Department, where he was a 60-year volunteer, 17 years as chief. (Matthew Walker photo)

Firefighters and other first-responders from across the region turned out with family, friends and other community members Monday to say farewell to William G. “Jerry” Saunders.

After graduating from Chuckatuck High School and serving four years in the Air Force, Saunders become Chuckatuck Volunteer Fire Department’s third fire chief, serving in the role for a total of 17 years amid 60 years of volunteering with the organization. 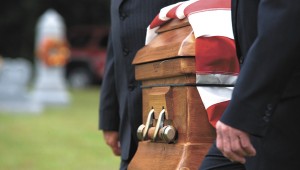 “That’s unheard of,” said his godson, Chuck Knight, addressing the service. “A lot of departments, you retire after 20.”

The department’s current chief, Greg Parsons, said Saunders was “many things to many people,” including husband, father, grandfather, brother, friend and mentor.

Parsons said Saunders was chief when he joined the department as a 20-year-old who thought he saw things that could be changed. What he thought was stubbornness in Saunders was “skepticism to changing what works,” Parsons said.

During their many conversations over the years, according to Parsons, Saunders’ favorite topic was always his family — what his children were doing, his grandchildren, and the time they had spent together on their latest trip to the beach.

“The advice he provided is something I look to on a continuing basis,” Parsons said.

“This service is a time of heavy hearts for many, but there’s always that sense of joy and celebration of what this man meant to our community,” Howell said.

Growing up in Chuckatuck for Howell, Saunders and others of their generation was “much like growing up with a group of Tom Sawyers and Huckleberry Finns,” Howell said.

“There were a lot of energetic and adventurous people around town,” he said. “I know Jerry has explored every field, every piece of woods, every creek … in the entire area, and he enjoyed doing it.”

He honed his building skills early with a clubhouse on Chuckatuck Creek, Howell said. “I remember going there once or twice,” he added. “Jerry loved the outdoors. I think of Jerry as a rugged individualist.”

Saunders was also a member of the Chuckatuck Ruritan Club — where the clam chowder during oyster roasts brought his cooking skills to the fore — and the Suffolk Police Auxiliary Unit.

He was active in Boy Scout Troop 25, plus several other civic organizations. Saunders was out on a call with Chuckatuck VFD the morning before going into the hospital.

Engine 29 transported Saunders’ casket to the department headquarters on Kings Highway for a flag ceremony, then back to the church cemetery for the burial.