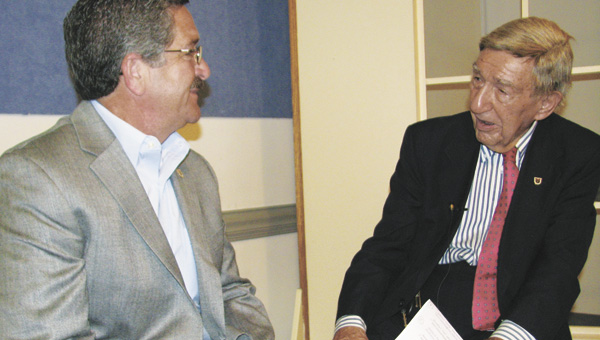 Candidates for Suffolk City Council sat down across from former mayor Andy Damiani on Tuesday to talk about school funding, the city’s financial position, capital improvements and other topics.

All nine candidates each taped about five minutes’ worth of footage for Damiani’s “Roundtable Talk” public-access show.

Predictably, the four incumbents argued for continued progress by staying the course, and the five challengers made their cases for change.

“I think things are great,” Councilman Charles Parr said. “I want to make sure we keep progressing forward instead of slipping back.”

Parr, running for re-election in the Suffolk borough, touted his track record that he says helped lead to the city’s new AAA credit rating and “the best economic growth in the worst economic times in my 53 years of life.”

He said he wants to see the city move forward with plans for a new library downtown that will include a higher education component as well as explore the possibility of an elementary school in the core city.

“I believe I’ve done a good job the last eight and a half years,” he said.

“I’m very delighted in the progress we’ve made in the last seven and a half years,” Gardy said. “In ’06, finances were pretty tough. In ’08, we had the bottom fall out. (But now) we’ve reached AAA with Standard and Poor’s. We came out of this ’08 debacle pretty well.”

Gardy said he wants to see the city continue to grow its cash reserves, even though it already exceeds its own policy for how much cash to keep.

“We can still grow, and we’re still growing,” he said.

“We’re on the right track,” he said. “Our financial is one of the best in the area. We’ve kept the taxes low for our citizens. We must continue to keep our city fiscally, financially sound.”

Brown said the city will “continue to bring in quality of life.”

Councilman Mike Duman, who is running for re-election in the Chuckatuck borough and is the only unopposed incumbent, said he appreciates the citizens of Chuckatuck giving him the opportunity to serve.

He also touted the AAA credit rating — “That’s indicative of a good, clean financial statement,” he said — and said he wants to work on communication between City Council and School Board.

“I don’t believe it’s being done to the extent it should be,” he said of communication.

The five challengers expressed their hope for change during their interviews.

“I think we’ve got some challenges in Suffolk,” said Kerry Holmes, running in the Suffolk borough. He pointed to what he called “systemic issues” in the school system such as loss of teachers and accreditation.

“We’ve got some massive issues we need to address,” he said. “We are hemorrhaging quality teachers.”

Holmes said the council’s attitude to that and other issues “has been that it’s not their responsibility.”

Don Goldberg, also running in the Suffolk borough, said he’s concerned about turnover in the schools as well as in the public safety departments.

Goldberg added he’s “used to juggling things” and will be able to tackle a number of issues.

Cypress borough challenger Leroy Bennett, a former councilman who was drawn out of his district two years ago, said he’s running again to “serve the people.”

He said he’d like to revisit a number of fees and increased water rates that citizens are paying.

“People are very burdened with these,” he said. “It has put a hardship on them.”

He also said he wants to see more communication with schools throughout the year.

“I want to work closely with the schools way before budget time,” he said. “I think we need to look at other things we can do rather than raise taxes.”

Clinton Jenkins, also challenging in the Cypress borough, said he is concerned about schools and industrial development.

“The citizens have expressed concerns about the quality of our school system,” he said. “If you vote for the same people on a regular basis, the results will not change.”

He also said the city needs “to do more to bring more quality industry into the city,” with high salaries.

“When they spend that money in the city of Suffolk, that is a step in the right direction,” he said.

Johnson said he’s tight with money and will continue to be so if elected to City Council.

“I think sometimes in this city, we do tend to waste a little money.”

He pushed for no closed meetings except for those on the topic of personnel.

“Not as many back-room politics,” he said. “I think our citizens need to be able to talk about it.”

“Suffolk has so much potential, I think we need to look down the road 40 years and be ready for it,” he said.