Editor’s Note: This is the first in a series of stories about School Board candidates. Look for the rest on Wednesdays during October: Cypress on Oct. 8, Holy Neck on Oct. 15, Sleepy Hole on Oct. 22 and Suffolk on Oct. 29.

After losing to Linda Bouchard in 2010, Chesapeake high school teacher Dorothy Bland Gamble is running for the Chuckatuck seat on the Suffolk School Board for the second time. 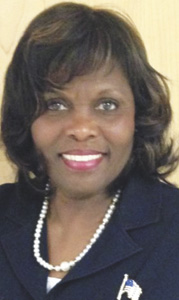 The 61-year-old was unavailable for an interview, but she discussed her platform during a recent candidates’ forum hosted by the Sleepy Lake Homeowner Association.

She listed “maintaining a safe and orderly school environment” as one of her top issues. Police officers in Suffolk schools could be used, she indicated.

“In some schools, they are part of a school curriculum,” Gamble said. “In Suffolk, I don’t think there is clear communication as to what they need to do.

“They can be used as resource people, to supplement the curriculum, troubleshoot, solve problems, peer mediation, those sorts of things.”

Gamble said the School Board should hold the superintendent accountable “for a lot of things, and one thing is communication with the police chief to assure schools are safe.”

Virginia’s “accountability system” is her biggest concern, she said. “Standards continue to go up,” she said.

Gamble argued in favor of a “literacy campaign” to get more students reading earlier.  “I think it’s really important to teach a child how to read before they leave third grade,” she said. “Statistics show it greatly hinders their quality of life if you don’t.”

Questioning the superintendent’s response to dipping standardized test scores in several areas, she said the district should implement “some type of research-based instruction to pull our scores up.”

“I’m a research-based person,” she said. “We need to look at other ways of bringing education to our children.”

She indicated she favors the “school-within-a-school” system, giving Southeastern Cooperative Education Programs (SECEP) as an example. “It shares the resource of a school — there’s a lot to say about that,” she said.

On the issue of funding, Gamble said she understands City Council is reluctant to give more money for schools “until there’s confidence that it’s being spent well.”

“I think we have a board that basically rubberstamps a lot of things,” she said. “I would have asked about those 32 new staff, when the teachers are suffering.”

On the pay issue, she said uncompetitive salaries aren’t the only reason teachers are leaving. She cited low morale, curriculums and a lack of feeling empowered.

“Children in Suffolk should have more opportunity to become involved with the curriculum,” she said.

“In Suffolk schools, the morale is low. Teachers are not feeling as if they are empowered. When you complain and you say something, you get bullied.”