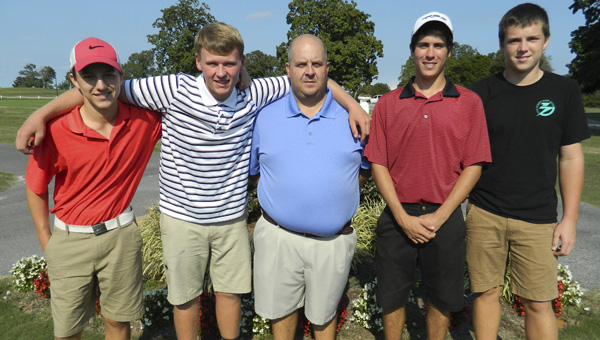 Nansemond River High School’s golf team has been in a bit of a rebuilding year, but that did not stop it from producing its second consecutive dominant win in the Ironclad Conference tournament.

The Warriors recorded a two-day score of 666 in the event that began Monday and concluded Tuesday on the Cardinal Championship Course at the Newport News Golf Club.

Suffolk’s public schools had a 1-2-3 finish, as Lakeland High School took second, qualifying for regional competition along with NR.

After going 7-2 in the 2013 regular season, Nansemond River finished 5-4 this year with less experience to lean on, but Warriors head coach Craig Stephenson said, “Everybody’s improved since the beginning of the year.”

“I was very proud of them,” he said following their tournament win this week. “These were two of our best scores all year.”

The Warriors shot a 334 on Monday and tied their best performance of the season on Tuesday with a 332.

Leading the way for Nansemond River this week was its lone senior, Leo Outland. He registered the third-best individual score in the tourney with a two-day total of 162, shooting an 81 on both days.

Junior Ryan Fischer was right behind Outland in fourth with a 164, and junior Brian Russell took sixth with a 168.

Lakeland, which completed the regular season with a 1-8 overall record, finished the tourney on Tuesday with a team score of 757.

“We’re very pleased,” Cavaliers coach Stephen Watkins said. “We finished second, so we did qualify for regionals, and that was our goal at the beginning of the season.”

“He was first team all-conference,” Watkins said. “He shot 82 and 82, ended up being one of the top (five) scorers overall.”

King’s Fork High School had a team goal of finishing in second place and qualifying for regionals, but it fell 36 strokes short of Lakeland’s score with a 793.

“Although we didn’t get our ultimate goal, I think the kids performed really well,” Bulldogs coach Calvin Mitchell said. “They had individual goals that they were trying to get to. Most of them got within five or seven shots of their individual goals.”

Senior Will Crow had the best two-day score out of the Suffolk golfers, placing second in the tournament with a 156. He shot a 75 on Monday and an 81 on Tuesday.

The top six individual scores from golfers who were not on the top two teams also qualified to go to regionals. In addition to Crow, senior Stephen Shaffer (202) and sophomore Noah Rose (213) were among the six.

This is the first time ever King’s Fork has had three golfers go to regionals.

Mitchell said he had been trying all year to get the members of the Bulldogs, which went 1-8 in the regular season, to play for each other and was pleased to see it happen this week.

The coach said, “My biggest standout, because he accomplished a challenge that I put before him, was Will Crow. I challenged him to become a leader on the team.”

He wanted Crow to set an example for the rookies, “and that he did,” Mitchell said.

Crow was named to the all-conference first team, while Shaffer made the second team.

The 4A South Region tournament will take place Monday and Tuesday on the Yorktown course at the Williamsburg National Golf Club.