When a giant fiberglass peanut drives past, reactions vary. Folks generally freeze, though, and their heads rotate like the laughing clowns in sideshow alley.

Such was confirmed Wednesday when three recent college graduates drove a Suffolk News-Herald reporter around Suffolk in one of the three Planters NUTmobiles plying the nation’s roadways. 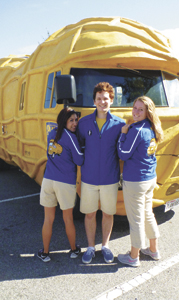 Melany Rodriguez, Mason Kerwick and Meghan Kruger brought the Planters NUTmobile to Suffolk on Wednesday to give reporter Matthew Ward a chance to see what it’s like to cruise around in one of the most unusual vehicles on the road.

Mason Kerwick of Austin, Texas, who attended the University of Missouri, was at the helm of the 26-foot long vehicle, based on an Isuzu truck chassis.

On the road since the middle of June, the trio — whose members share the driving — has traveled more than 14,000 miles around 17 eastern states.

For Rodriquez, her favorite part of the experience is seeing the way people react when a giant peanut on wheels rounds the corner. The best reactions come from folks doing ordinary, everyday things like walking the dog or going to the grocery store, Kerwick added.

Of course, the NUTmobile is in town for Peanut Fest, celebrating Suffolk’s enduring relationship to the legume at Suffolk Executive Airport this Thursday through Sunday.

“During the harvest of peanuts, it seems like we have been going to more peanut festivals than the rest of the year,” Kerwick said.

They’ve also been to things like NFL games, Macy’s 4th of July Fireworks on the Brooklyn Bridge, and even a Beyonce concert.

One early challenge during Wednesday’s tour in the bulky NUTmobile was getting out of the parking lot. “These are some of the daily things we go through — how do we get from point A to point B,” Krueger said.

Eventually we were heading up North Saratoga Street, past the Suffolk Center for Cultural Arts and onto North Main Street.

We hung a right after the car dealerships onto Godwin Boulevard, went east on 58 then took the Wilroy Road exit and returned to the office via East Pinner Street.

The three young NUTmobile drivers are relatively new to Suffolk and its peanut — and Planters — heritage. Kerwick said he learned about the Suffolk connection at his great-aunt’s celebration of life after he got the NUTmobile gig.

“Relatives living in Suffolk were just gushing about the connection,” he said. “It has been nice being in the area and touring the plant for the first time.”

“We were in Richmond a couple of weeks ago, and people were, like, ‘Oh yeah, you’ve got to stop in Suffolk,’” Krueger said.

Last week, the trio visited their first peanut farm. It was at the invitation of a Virginia Peanut Growers Association member they’d met at a Flying Squirrels baseball game in Richmond, Krueger said.