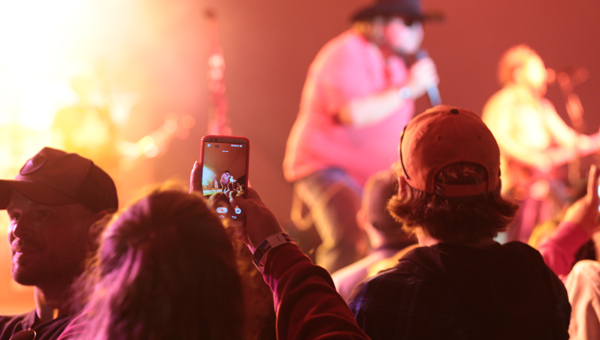 Colt Ford performs at the Suffolk Peanut Festival on Saturday night while Wendy Gambill records him in the foreground. The festival continues Sunday from 10 a.m. to 7 p.m.

The first hints of fall weather combined with the entertainment, rides, food and fun to bring thousands of people to Peanut Festival this weekend.

“We’re very happy,” said Lisa Key, Suffolk Festivals executive director. “We had good weather. We had a good crowd. It looks like the weather is going to hold for Sunday, too.”

After a rain-soaked 2013 Peanut Festival, the cloudy but dry — until the last minute on Saturday — weather helped create a near-record-breaking Friday night, publicity director Theresa Earles said. Saturday was looking to be the same even before the concerts by the Cody Austin Band and Colt Ford started.

“People have been calling nonstop about Colt Ford,” Earles said.

Amy and Brian Walters came from Virginia Beach with their grandchildren in tow. It was their first time at the festival, they said, as they watched the Peanut Butter Sculpture Contest take place.

“For years, I’ve said, ‘We should go to that Peanut Festival,” Amy Walters said.

They were glad they came.

“The kids are really enjoying it,” Brian Walters said.

Before the weather turned chilly, Peanut Butter Sculpture Contest participants dug into their blocks of peanut butter and created anything their hearts desired. Several peanut-butter flags were on display, reflecting the event theme “We Are Nutty About America.”

Olivia Elliott of Nansemond-Suffolk Academy, a member of the Peanut Fest court, was at a disadvantage during the contest, though, as she was wearing a cast on her left arm due to a tennis mishap.

“I kept it simple,” she said of how she managed.

Peanut Fest Queen Morgan Hunt created a globe with a flag and a peanut. She initially wanted to do a Mr. Peanut holding a flag, but he kept falling, she said.

A chalk art competition also took place during the day. Following are the results: