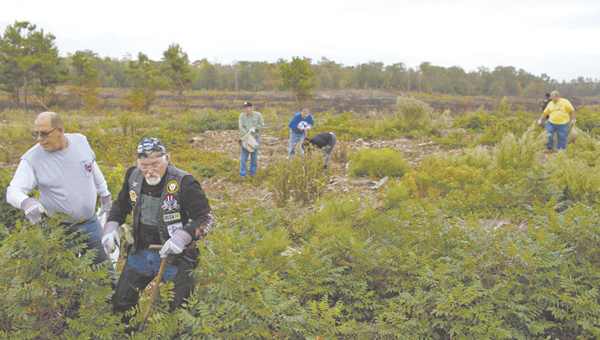 Rick Horton, left, and Bryan Casey, right, search for markers that indicate where to plant seedlings while taking part in Harley-Davidson’s Renew the Ride event, on Sunday in Suffolk. Riders planted 1,000 tree seedlings at South Quay Sandhills Natural Area Preserve in an effort to preserve the land for future generations. (Submitted Photo)

Volunteers planted 1,000 new trees at a nature preserve in Suffolk on Sunday, kicking off a campaign to plant a total of 110,000 across the state.

“It was a marvelous day to plant trees,” said Geof Rochester, managing director for The Nature Conservancy.

It was part of the conservancy’s Plant a Billion Trees program that aims to turn back the tide of deforestation. Specifically in Virginia, the program aims to restore the longleaf pine ecosystem, one of The Nature Conservancy’s highest conservation priorities in North America.

“We are trying to rebuild and strengthen the longleaf pine environment,” Rochester said. “The longleaf pine is very important to the ecosystem of Virginia. They’re a very resilient tree, and they’re critical to water purification and filtering air.”

Rochester said the trees are like “the redwood of the East,” in that they grow to be 150 feet in height and can live 300 years or more.

The program is sponsored globally by Harley-Davidson, which brought out about 20 riders to deliver the seedlings and help plant them. The program started with a commitment to plant 110,000 trees in Brazil, has continued to Virginia and will be moving to other areas, Rochester said.

“We see it as activating Harley dealers and riders throughout the state,” Rochester said, adding that Harley-Davidson is philanthropic on a number of fronts, also including the Muscular Dystrophy Association, military veterans’ groups and more.

The South Quay Sandhills Nature Preserve on Camp Pond Road in southwestern Suffolk was chosen because it’s near Harley’s Hampton Roads dealer and fan base, as well as for the ecological effects of restoring the longleaf pine in southeastern Virginia.

The preserve encompasses about 3,500 acres in all.

Rochester said Sunday’s event went well and had about 60 to 70 folks in attendance altogether.

“It was fast work, and you felt like you were doing something positive,” he said.