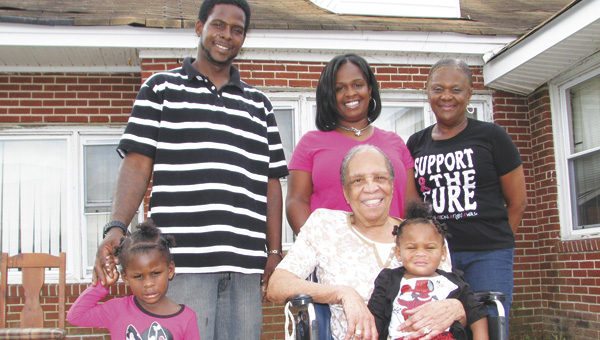 Members of the Boddie family stand in front of their family’s house that they will be renovating in memory of their lost loved one, Tiffany Renee Saunders-Boddie. Pictured in back are Tiffany’s husband, James Boddie; sister-in-law, Nichole Boddie-Kelly; and mother-in-law, Judy Lawrence-Lamb. In front are Tiffany’s children, Taylor, on left, and Maddie, in the lap of Lawrence-Lamb’s mother, Lucretia Lawrence.

The family of a young woman who died in a car accident in August will be remembering her life by restoring a home near downtown Suffolk.

Tiffany Renee Saunders-Boddie, 29, died Aug. 16 in the crash in Southampton County. She was an employee at the Goodwill store on North Main Street in Suffolk, much loved by her co-workers and customers.

The house her husband’s grandfather built at 115 Carver Ave., across from Tabernacle Christian Church, has been vacant for several years, said Tiffany’s mother-in-law, Judy Lawrence-Lamb.

Lawrence-Lamb’s father built the house, but her mother had to move out in 2009 to help nurse her during a battle with breast cancer. The mother subsequently broke her hip and was unable to live alone again.

The roof is badly damaged, which has allowed the elements to damage the rest of the house.

“The roof has caused deterioration in the house,” said Lawrence-Lamb, who said she considered Tiffany her own daughter after she married James, her son. “It caused the inside to become an absolute mess.”

Tiffany left behind six children along with her husband. Her sister-in-law, Nichole Boddie-Kelly, has four children and plans to move into the restored house with her brother so that the two can help each other out. The house, although it looks small from the street, has several bedrooms and bathrooms and could easily accommodate the children, Boddie-Kelly said.

“I’m trying to get it together,” said James Boddie.

Donations of money or time are gladly accepted toward the project, which is being called “Restoration Smile” in memory of Tiffany’s contagious joy.

“Even if they don’t have the finances, they may have the ability to drive a nail,” Lawrence-Lamb said.