Employees and residents alike at Autumn Care of Suffolk agree that the administrator of their facility was deserving of an award he recently received from the Virginia Health Care Association.

Bill Belmonte was given the Nursing Facility Administrator of the Year award during the organization’s annual convention in Richmond on Sept. 17. 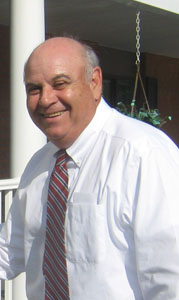 “They couldn’t have picked a more deserving person,” said Debbie Allen, who is the east wing unit manager at Autumn Care. “I can’t say enough good things about him.”

Belmonte, who lives in his hometown of Emporia and commutes to Suffolk every day, said he was “humbled and honored” by the honor. He was also surprised, after receiving a fake letter his staff had drafted telling him he had been nominated but didn’t win.

“I try to motivate and bring the best out in everybody,” Belmonte said. “I do that by getting out and about. I’m not in the office unless I have to be. I have to earn the trust of the employees that are really out there trying to do the best they can to give excellent patient care.”

Belmonte got his start in health care in Emporia, where he worked for a local hospital. He moved up through the ranks after starting as a purchasing agent, he said.

He worked there for 25 years, until he got the chance to work for Autumn Care about eight years ago.

“I like to provide a work environment where people enjoy their work,” Belmonte said. “Autumn is a different kind of company. It really promotes patient care and employee recognition.”

Belmonte is a graduate of Campbell University and received his Master of Business Administration from Averett College. He is a fellow in the American College of Healthcare Executives and also holds a healthcare management certificate from Duke University. He and his wife have two sons and two grandchildren.

Angela Parker, the business office manager, recalled a resident who said she wanted to purchase some headphones so she wouldn’t bother her roommate as she watched television.

Parker said Belmonte overheard the conversation and went to the store immediately.

Allen told a similar story about a resident who wanted a radio.

“He stopped everything he was doing,” she said. “That’s just the type of person he is.”

“He’s really kind and considerate to our residents and very caring,” she said. “He’s a person who believes in giving, and he seems to ask very little in return. He gives of himself daily.”

“He’s an awesome administrator,” environmental services supervisor Lynette Beard said. She recalled seeing him open his wallet and give money to an employee who needed it.

“He’s very passionate, he’s a good man, and I love working for him,” Beard said.