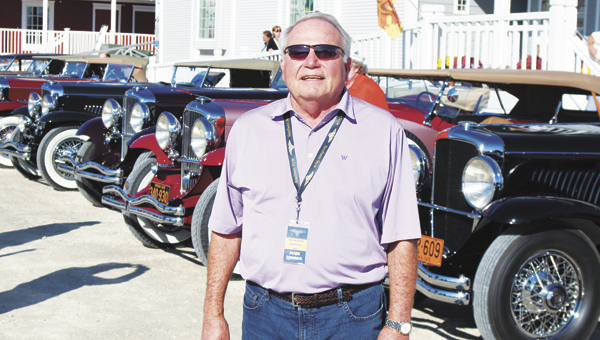 North Suffolk’s Dwight Schaubach — who co-organized a tour for owners and owns two of them himself — stands in front of more than a dozen Duesenbergs lined up outside Smithfield Station on Tuesday. Owners have come from across America to base themselves in Williamsburg and tour the region for several days.

There’s a 1929 Murphy Roadster, which the Schaubachs found in a Charlottesville barn, and there’s the 1930 J LaGrande Dual Cowl Phaeton, bought at auction in New York.

In the couple’s stable of classic cars — not to mention on the road — the completely rebuilt Dueys stand out for their elegant lines and massive headlights.

But outside Smithfield Station on Tuesday morning, they were just two of the mob.

Previously, New York’s Sam Mann had organized three days-long tours for Duesenberg owners. But he wasn’t going to do so this year, according to Dwight Schaubach.

So Schaubach teamed up with Mann to make it happen. Locals Phyllis Speidell and John Sheally assisted.

Via the Jamestown-Scotland Ferry, 20 Duesenbergs motored to Smithfield from Williamsburg, where the tourists have based themselves.

For participants, it’s several days of motoring the area’s scenic roads, visiting its historic attractions and dining on fine food.

They guided their Duesys through Shirley Plantation and toured Berkeley Plantation. Returning to Williamsburg, they dined in the evening at the King’s Arms Tavern, Schaubach said, strolling to it from their Duesys to the accompaniment of fifes and drums.

The merry group also managed to squeeze in an oyster roast.

“The tours are mostly out west,” Schaubach said. “This is the first time on the East Coast.”

From Smithfield, the group was to drive to Hertford, N.C., for lunch at the Newbold- White House vineyard, then on to Manteo to spend the night.

“We head back to Williamsburg tomorrow, then on Thursday we go to the Eastern Shore,” where they’ll lunch with local culinary luminary Amy Brandt, Schaubach said.

When the Suffolk News-Herald spoke to him, Schaubach awaited the arrival of a few more Dueys to Smithfield Station, coming across the river on the ferry.

“One of them hopefully will be the Clark Gable car,” Schaubach said, referring to a 1935 convertible once belonging to the Hollywood star.

Lined up in the gravel parking lot on a perfect fall morning, the Duesenbergs were drawing scores of the curious. They parked across the road, walking over to marvel.

No wonder: So many in one place, at one time, doesn’t happen often.

Of the 480 cars the American company built between 1928 and 1937, about 200 are known to exist around the world today, Schaubach said.