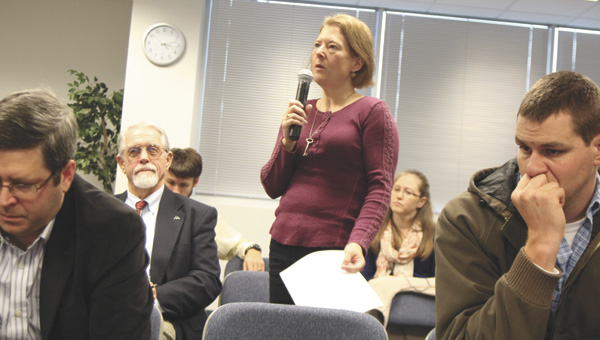 The commission established by the General Assembly to build the road projects that will solve Hampton Roads’ highway woes hosted a town hall meeting in North Suffolk on Wednesday.

After a presentation on the Hampton Roads Transportation Accountability Commission’s formation, structure and progress thus far, the meeting morphed into an existential debate on why the political subdivision is required in the first place, its constitutionality and the merit of its first moves to solve gridlock.

Debate largely centered on the validity of one of five projects the commission has voted to move forward on. The Hampton Roads Third Crossing involves the widening of Interstate 664, a new east-west bridge-tunnel linking Hampton Boulevard in Norfolk to the Monitor-Merrimac Memorial Bridge-Tunnel and a new four-lane highway from this “Patriot’s Crossing” to the Western Freeway.

Several speakers at the Virginia Modeling, Analysis and Simulation Center cited the focus on this project, which also links to a future new marine cargo terminal at Craney Island, instead of increasing capacity at the Hampton Roads Bridge-Tunnel as evidence the commission is using region-specific taxpayer funds for roads that benefit the Port of Virginia while achieving negligible impact on congestion.

Projects that would benefit the port should be paid for from state coffers, they argued, and the estimated annual $150 million-plus Hampton Roads Transportation Fund cash reserved for the HRBT and other projects they contend citizens would prefer it spent on.

“If the port wants to build a $4.5 billion bridge-tunnel and a new Route 460 and we are paying the tax in Tidewater that funds this amount of money, then the state can pay for that,” one man said, adding, “We have a real little scam going on between the port and the state.”

One woman said the commission is ignoring its own survey in which 90 percent of respondents supported the HRBT for the slate of initial projects. “That’s not in the plan,” she said.

Chesapeake Mayor Alan Krasnoff, chairman of the commission, said the projects were taken from those endorsed by the Hampton Roads Transportation Planning Organization — another regional body the commission was designed to collaborate with — and that the HRBT is a candidate project for the TPO’s upcoming 2040 long-range plan.

“I think we will be seeing the Hampton Roads Bridge-Tunnel,” Krasnoff said. “That’s going to be up to the TPO.”

Hampton Roads Tea Party and Virginia Beach Taxpayers Alliance member Reid Greenmun, one of the more vocal among the audience of about two dozen, disputed TPO interim executive director’s Camelia Ravanbakht assertion that building the Third Crossing would reduce traffic on the HRBT by about 10 percent.

“The best-case scenario is a five-percent reduction,” Greenmun said.

Another audience member declared the commission contravened the state constitution because it’s a regional form of government created without a referendum. Others said that if it was only created because the TPO doesn’t have bonding authority — an important function that will allow the commission to leverage its funding — a simple and much less expensive bonding office could have been created, or bonding powers conferred to the TPO.

Krasnoff, Ravanbakht and Suffolk Mayor Linda T. Johnson, who stood before the audience, appeared to grow exasperated by the end.

“The General Assembly passed this and gave it to us. That argument needs to be put at a different level,” Johnson said, adding some people agree with the “method,” some people don’t.

Speaking to accusations that the public is being ignored, Krasnoff explained how delays to projects, which have to clear numerous regulatory hurdles, can mean much higher bills for taxpayers.

One audience member was North Suffolk’s Dwight Farmer, former executive director of the TPO and Hampton Roads Planning District Commission. He sat quietly for most of the meeting, before reflecting on the TPO’s frustrations at not having the funds the accountability commission now has.

“The message that came out for the last 20 years was, ‘This is all about nothing if we can’t get the General Assembly to generate the money,” Farmer said.

“We are probably 30 years behind where we need to be with roads,” she said later in the meeting, responding to calls for a focus on mass transit.

“Right now we have got to connect our region and make sure that it works.”

Three people accused in the Sept. 22 murder of a local businessman were indicted on a variety of charges by... read more