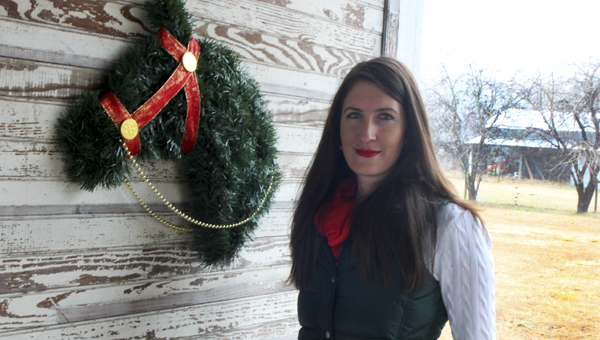 At her family’s Chuckatuck farm, Joanna Bickham shows an example of the Christmas wreaths shaped like horse heads with which she has raised about $1,000 for ReRun Inc., a Suffolk-based thoroughbred horse rescue.

Then, in October, “Charger” had to be euthanized after suffering colic.

Bickham and some fellow volunteers there had rescued him in June from Camp Courage, a program in Prescott, Ariz., for child burn victims.

“To honor both horses, I decided I wanted to do something to help a local rescue,” Bickham said.

ReRun Inc., based at Happy Valley Equestrian Center just outside downtown Suffolk, rehabilitates ex-racehorses and finds them appropriate new homes. “Not many people know we have a (horse) rescue in Suffolk,” Bickham said.

Bickham soon came across a method of fashioning wreaths in the shape of horse heads. She modified it and started making them, helped by her mother, Carolyn Bickham, and boyfriend, Matthew Nixon.

Old Dominion Hay in Smithfield has allowed Bickham sell her wreaths in their shop. She has raised about $1,000.

“I donated my time and all of the materials, so 100-percent of the profits could go to ReRun,” she said. “I think I made about 20.”

When she was a graduate student at Prescott College, Bickham volunteered at the camp where she discovered Charger. One day, she peeled back the lips of the horse, which was spending his days carting children around, to find the tattoo confirming he was a thoroughbred.

She’s working toward a master’s degree in counseling with a concentration in equine-assisted mental health. The program is mostly online, Bickham said, but she travels out to Arizona twice a year for the residency portion.

Bickham has long been interested in the ability of horses and other animals to help those suffering mental health and other issues. She also volunteers with Smithfield-based nonprofit Horses Helping Heroes Project, helping veterans deal with the psychological wounds of war.

Her brother, Lon Bickham, suffered burns to about 94 percent of his body in an accident in Emporia in April 2011. He endured 19 months of rehabilitation before his homecoming.

“When my brother got into his accident, I got his dog certified as a therapy dog,” Joanna Bickham said. “Then I started working with veterans.”

Bickham said she was unprepared for the demand for her wreaths. “I had demand to ship them all over the U.S., but I just couldn’t,” she said, adding she plans to make the fundraiser for ReRun an annual tradition.

Amid her studies and work for nonprofits, Bickham also runs a licensed pet-sitting service, Woof to Hoof, specializing in equine and farm care.

They’re no longer available at Old Dominion Hay, but Bickham said she has kept a few of her unique wreaths in reserve. Anyone interested in getting one before St. Nick arrives — though that would be cutting it close — can contact her through www.wuf2huf.com.