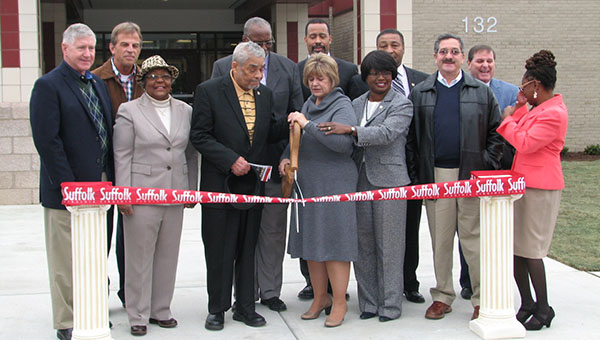 Air hockey, ping-pong and billiards were among the many activities residents of Whaleyville were trying out at Friday’s ribbon-cutting and grand opening of the Whaleyville Community Center.

The standing-room-only crowd that gathered in the new gymnasium for the ceremony soon fanned out to begin taking full advantage of everything the new center has to offer, including its game room, group exercise room, fitness facility and computer lab.

“I’ve heard so many good ideas today about things we could offer here,” said Phyllis Byrum, the School Board member who represents Whaleyville. “We’ve been waiting a long time. It sure has changed, but it’s wonderful.”

The old Robertson Elementary School closed in 2011 after the School Board decided upkeep on the aging building was too expensive. The school division handed the building over to the city, and construction began to convert it into a recreation center in September 2013. 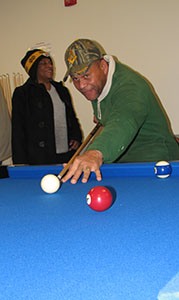 James Scott tries out the new pool tables in the game room at the Whaleyville Community Center following Friday’s ceremony.

It is the second time in the last six years that the city has converted a former school building into a recreation center. A similar project took place on South Sixth Street and became the East Suffolk Recreation Center, which opened in 2009.

“We took the lessons learned from that one and applied them to this one,” Buildings and Capital Programs Director Gerry Jones said Friday.

He said the team “tried our best to maintain some fabric from the original school.” The terrazzo floors, dedication plaque and flagpole have remained in place, he said.

The construction project saw several delays, including weather, roof decking that was too badly corroded to use and the death of the site work subcontractor just before site work was to start.

Blair Brothers stepped in to do the site work at the last minute and was still paving on Thursday night.

“We about had them pulling their hair out last night,” Jones said Friday.

Councilman Curtis Milteer, who represents Whaleyville, acknowledged the long wait but said the facility will be worth it.

“This center is going to be a success, because we’re going to make it a success,” he said.

But speaking of exercise, officials applauded for the $250,000 grant from the Obici Healthcare Foundation that purchased fitness equipment for the center.

“The legacy of Amedeo Obici certainly lives on,” Johnson said, referring to the Planters Peanuts founder.

“We are proud to be a part of this amazing center,” Foundation Executive Director Gina Pitrone said.

Parks and Recreation Director Lakita Watson noted that for many years, there was only one recreation center — Birdsong — in all of Suffolk.

“Now, in just half a decade, we are opening our second, and we are in the process of designing a third,” she said, referring to the proposed Bennett’s Creek Recreation Center on Bennetts Creek Park Road.

Local residents said on Friday they are excited about the possibilities at the center.

Jannie Branch plans to take some exercise classes, she said. Margie Gripper is waiting to see what the class schedule is before she decides whether to become a member. She’s already a member at the East Suffolk Recreation Center.

The new center will be open from 6 a.m. to 8 p.m. Monday through Friday, 8 a.m. to noon on Saturday, and will be closed on Sunday.

Call 514-7101 for more information on the Whaleyville Community Center.