Faith in a squad car 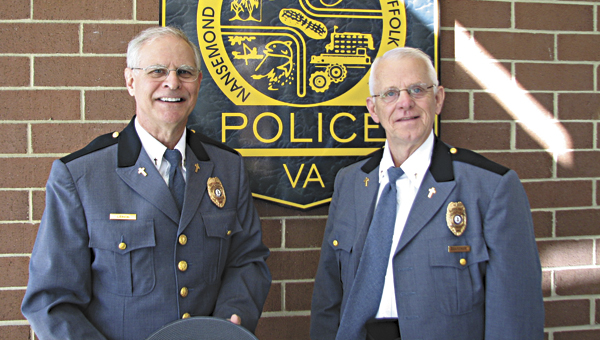 With two new chaplains and about five more on the way, the recently revived chaplain program in the Suffolk Police Department has gotten off to a strong start and has proven popular with officers, as well as with the chaplains themselves.

“It’s an opportunity, first of all, to serve God,” said Carl LeMon, senior pastor of Ebenezer United Methodist Church, who was the first to get started with the program in August. “For me to move out of the pulpit into a squad car, there’s a connection between the two.”

Wayne Gardner, a retired United Church of Christ minister, is the other chaplain currently in the program, which operates as part of the police department’s volunteer program.

“They said, ‘Thank God this has been revived,’” Gardner said of one of the first squads of police officers he met with.

“Reviving our chaplain program is part of our ongoing commitment to helping our employees manage the stress of their work,” Bennett said. “As part of our organization, they can provide a confidential sounding board for our employees who daily deal with stress caused by their involvement in traumatic incidents.”

When recruiting for the program, Vroman first approached LeMon, who is his pastor.

“He just jumped right on it,” Vroman said. “It was an area of interest I didn’t know he had.”

Vroman used his wife to get to Gardner, since the two are in Suffolk Master Gardeners together.

The chaplains often go on ride-alongs with the officers to build relationships. They are able to minister not only to the officers but also to the people the officers encounter.

“It’s kind of the Jesus model, when you think about it,” Maj. Stephanie Burch said. “Jesus didn’t sit in the temple and wait for people to show up. A lot of people aren’t going to self-select to go to church, but they’re not opposed to spiritual guidance.”

Burch said the chaplains “have fresh eyes our officers may not have.” For example, it’s easy for officers, who respond to hundreds of car accidents every year, to forget that most of the victims are experiencing their first crash.

“They become almost weather-worn, kind of like sensory overload in a way,” Burch said.

Gardner said he has been able to help officers with their investigations by keeping victims out of the way.

Everything shared with the chaplains by officers is completely confidential, Gardner said.

“When you break that sense of trust, you’ve lost your accountability,” he said.

LeMon, who is preparing to retire from the full-time ministry, said the police chaplain program is an excellent way for him to continue serving God in an official capacity.

“I believe we need a strategy for retirement,” he said. “My congregation has grown by 200-plus and their families.”

A mother and daughter from Colerain, N.C., were killed in a crash Tuesday morning on Whaleyville Boulevard. Teresa Brooks Brown,... read more