No tears from ‘Evita’ students 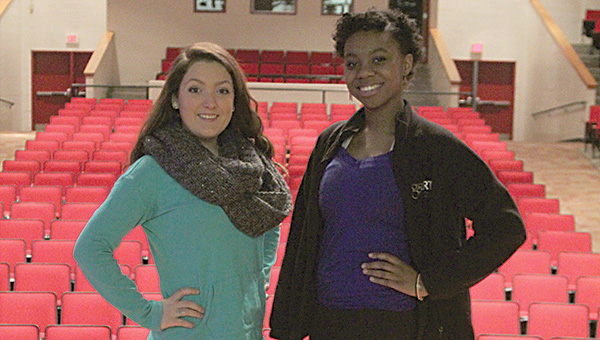 Alyssa Benier and Jaylen Barnes are participating in a Governor’s School for the Arts production of “Evita,” about the controversial Argentinean first lady. The Nansemond River High School juniors say the experience has inspired them to learn more about Eva Perón.

One Nansemond River High School student will take to the stage and another will be behind the scenes when The Governor’s School for the Arts presents musical drama “Evita” later this month.

Jaylen Barnes and Alyssa Benier are both third-year juniors with the governor’s school’s musical theater department. They’re excited about helping bring to life the compelling story of the Argentinean first lady who captivated the world.

“You get to come together and create the picture that your director wants you to create,” she added.

Barnes, who had a meatier role in the governor’s school’s “Mary Poppins” last year, trained as a dancer. “I had no clue about the singing and acting thing,” she said.

“When I actually went into auditions for the governor’s school, I saw the different departments, and when I saw the musical theater department, I saw it was all three in one — acting, dancing and singing.

“I gave it a shot, and I got in. Since then, I have been hooked on musical theater.”

Benier is the show’s stage manager. “I have to be at every rehearsal, making sure they run on time and smoothly, and making sure everyone’s accounted for,” she said.

Every weekday, the students leave their home school for Norfolk at 1:10 p.m. The governor’s school runs from 2 to 5 p.m., and two hours of “Evita” rehearsals begin at 6 p.m.

Benier had two singing solos last year when she traveled to Japan with the governor’s school’s “I Believe in Music” show, and, prior to that, worked backstage on “Jekyll & Hyde.”

She appreciates the heavy responsibility of her current gig. “If I don’t call a cue, it would be bad,” she said.

Barnes chimed in: “It would be a train wreck.”

Before her involvement in the show, Barnes said, she wasn’t aware of Eva Perón — starlet at 22, the Argentinean president’s mistress at 24, first lady at 27, dead at 33.

In the governor’s school production of the Andrew Lloyd Webber and Tim Rice musical, Perón’s story — her connection to the working class and troubled relationship with the aristocracy and military — is told “through a compelling score that fuses haunting chorales with exuberant Latin, pop and jazz influences,” according to a news release.

“The more I learned about the story — where she came from and the type of person Eva was — it opened my eyes, that this was an actual person,” Barnes said.

“It made me want to learn about who she was and the impact she had on Argentina,” Benier added.