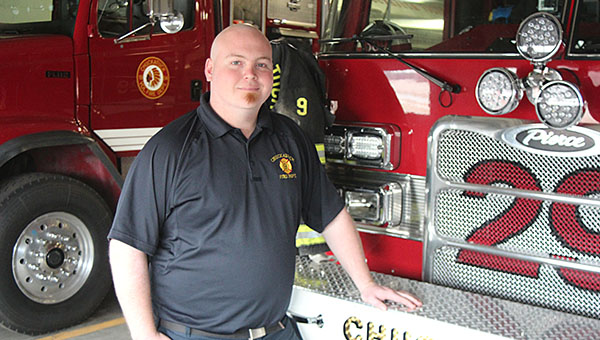 The membership of Chuckatuck Volunteer Fire Department has voted Henry White, pictured among some of the equipment at the station Monday, its 2014 Fireman of the Year. White paid tribute to his late grandfather, Henry Jones Jr., for fostering his volunteer spirit.

Chuckatuck Volunteer Fire Department’s 2014 Fireman of the Year credits his late Granddad for inspiring his commitment to service.

Henry White, a member of the organization since February 2008, was named the winner late last month, after a full membership vote at the department’s January business meeting.

White said his grandfather always sought to instill in him an understanding of the importance of community service.

“I thought, ‘What better way to help the community than to join the local fire department?’ and I’ve been here ever since,” White said.

Henry Jones Jr. was never himself a member of the department; his grandson said that between farming and working, he just didn’t have the time.

But “every time anyone called, he was there,” White said. “Any time a neighbor needed anything, he was the first one to jump.”

A senior fireman, White says he’s at the station almost every day. “I’m here throughout the day, and if not physically at the station, I’ve got my pager on and I’m somewhere in the community,” he said.

For a living, White “gets by doing odds and ends for people.”

He first started doing this “for a quick dollar,” with plans to start a business using skills and ideas he picked up watching his grandfather building items in his woodshop.

“I always enjoyed sitting watch him do it,” White said.

“I had planned to take his ideas and start it into a business, but I just haven’t gotten around to it.”

White said that when he joined Chuckatuck VFD, his grandfather was “thrilled.” “I would go to his house almost every morning and have coffee with him, and one of the first things out of his mouth was how we are going here (at the fire department),” he said.

The family atmosphere is White’s favorite aspect of volunteering with the fire department. “I love every single member, just the same as every member loves me,” he said.

“It’s hard to find that kind of companionship anywhere else.”

He also likes the adrenaline. “There is nothing more exciting than hearing the tones go off and not knowing what you are getting yourself into,” he said.

Johnson reflected on White’s commitment to the department thus: “He puts in as much or more time as anybody up there does.”

“He’s what you think of when you think of a good volunteer who’s dedicated to the department,” Johnson added.