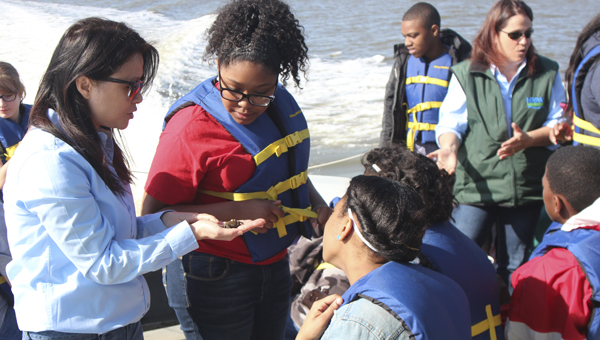 Plying Chuckatuck Creek and the Lower James on the “Jenny S.” was a whole new experience for several of the 25 John F. Kennedy Middle School students.

Half a dozen hands shot up when Yancey Powell, the Chesapeake Bay Foundation’s Hampton Roads education manager, inquired how many hadn’t been on a boat.

“This is my first time on a boat. Period,” Debreon Hill declared.

By the end of the almost two hours, not only was Hill familiar with the pleasures of boating on a beautiful day, he knew how many million eggs a sook produces, that Crittenden and Eclipse were once more connected to Newport News than to downtown Suffolk, and how counter-shading helps fish evade predators.

The Nansemond River Preservation Alliance student boat trips are ongoing through Friday, but the one that put out from the Volvo Penta Marina bright and early Wednesday was the first after the nonprofit released its latest biennial report card on Suffolk’s waterways.

The report card showed some waterways are severely compromised and requiring serious efforts to clean up.

The sewer system was the only area to improve since 2012, going from C to C+.

“The grades are not good,” water quality committee chair Steve Barnum said when announcing the State of the River, in Eclipse on Wednesday.

Bacteria in the Lower Nansemond has deteriorated from a B+ to a C. Up in the downtown Suffolk end, it was steady at D-.

Other pollution measures were unchanged from two years ago, with dissolved oxygen’s B the best grade.

Water quality samples are taken monthly at several locations, and grades are based on data averages over the two years.

The report describes Bennett’s, Bleakhorn and Knott’s creeks, and portions of the Nansemond, as “seriously compromised.” Barnum cited the Virginia Department of Health’s expansion last year of Suffolk waters off-limits to shellfish harvesting.

On sewer improvements, he said the city has done a lot to get people off septic systems.

The report was revealed to a small group inside Ruritan hall — where NRPA keeps its headquarters — including Councilmen Mike Duman, Lue Ward and Roger Fawcett.

The group heard criticism of how the city determines applications to develop inside the 100-foot vegetation buffer that state lawmakers legislated to help filter runoff and halt erosion in the Chesapeake Bay watershed.

Last year, it was revealed Suffolk’s Planning Commission conditionally approved all of the 25 such applications it processed in a two-year period. NRPA members and law students with the College of William & Mary’s Virginia Coastal Policy Clinic — a couple of whom also attended Wednesday — called for a new Chesapeake Bay board to handle encroachment requests.

“If you count them up, it’s death by a thousand cuts,” Barnum said of the combined impact of the buffer exceptions.

The river report card’s best grade was an A for education and awareness. Elizabeth Taraski, its executive director, said NRPA’s Watershed Initiative with Suffolk Public Schools has reached 2,000 students in the past two years.

The hope is that by taking seventh-graders on boat trips and involving them in things like shoreline restoration, they’ll better appreciate the cultural history and precarious environmental state of the city’s waterways.

“They tell their friends, and also their parents and their grandparents, so there’s a multiplier impact about this program,” Taraski said.

Education and Awareness — A