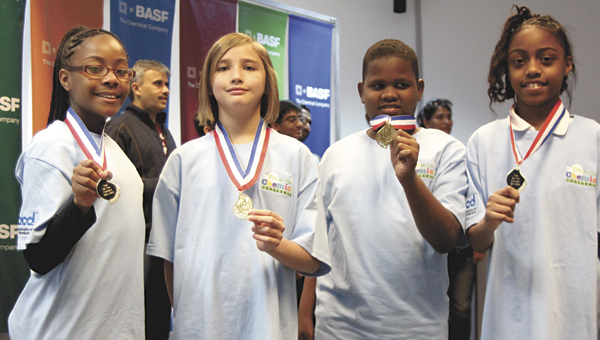 Mack Benn Jr. Elementary School’s Ariyahna Cheeks and Thalia Bonte, as well as Jamauri Demiel and Jaylen Daughtrey of Booker T. Washington Elementary School, hold out their medals after the Virginia You Be The Chemist Challenge, held at BASF in Suffolk on Saturday.

When the Virginia You Be The Chemist Challenge was held at BASF on Saturday, four Suffolk students were pitted against some of the best young science minds in the state.

Mack Benn Jr. Elementary School’s Ariyahna Cheeks made it to the third round of the seven-round contest.

Mack Benn Jr.’s Thalia Bonte, as well as Jamauri Demiel and Jaylen Daughtrey of Booker T. Washington Elementary School, were eliminated in the first round.

But the performance was a lot stronger than it appeared, based on the age of the students.

“Our students were fifth-graders, however, and they competed against seventh- and eighth-graders,” noted Beverly Nedab, human resources manager at the Wilroy Road chemical plant.

“I’m proud of them,” said Denise Singleton, counselor at Booker T. Washington. “They studied as much as they could.”

Singleton said the Suffolk students were excited when they progressed to the state level after the Hampton Roads round of the challenge, an initiative of the Chemical Educational Foundation and sponsored locally by BASF.

Nedab said she had invited all eligible schools in the region to field contestants in that earlier competition, but the 19 students who did compete were all from Suffolk’s Mack Benn Jr. and Booker T. Washington.

The difficulty level was stepped up a notch Saturday. “At this level, they have to make the questions a little bit difficult to separate the — how do I say — boys from the men,” said Ernie Leber, manager of the BASF location’s technical department, when a contestant protested about one question.

While it was a competitive event, with only one winner progressing to the national contest in Philadelphia on June 22, it also emphasized learning. Between rounds, Leber even presented a flocculation experiment, using polymers to clean up dirty water.

“The drive itself, I slept,” winner Athilesh said of the 3-½ trek to Suffolk.

The questions were challenging, he said, and all the contestants were “smart kids.”

Mom Jyothisree Padma said, “We feel good that his hard work paid off. He did work really hard.”

Dad Thanigai Ranganathan said they had hoped their son would at least make it to the third or fourth round. “Kids at this level, anyone can be the winner,” he said.

Nedab said, “Looking at the questions, these kids are awesome, I tell you.”

The war ends in Suffolk

By Kermit Hobbs Jr. Editor’s Note: To mark the 150th anniversary of the Siege of Suffolk two years ago, the... read more