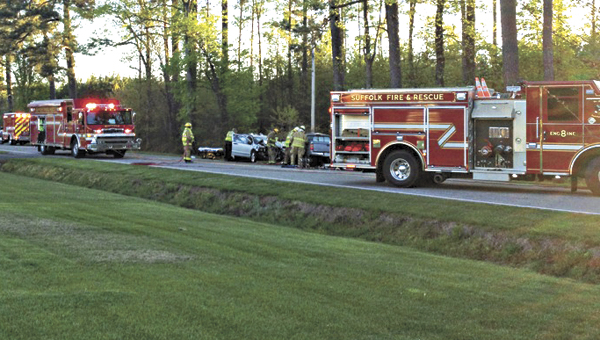 Two men died in this accident on Carolina Road Tuesday morning. The cause of the accident remains under investigation. (City of Suffolk Photo)

Two men are dead after a Tuesday morning crash on Carolina Road.

The victims have been identified as Dale Warren Saunders, 59, and Gail G. Ayers, 60, both of Corapeake, N.C., according to a city press release.

The head-on crash happened in the 5000 block just north of Deer Forest Road, according to the release. It was reported at 6:28 a.m.

The accident involved a Toyota Tacoma pick-up, driven by Saunders, and a Dodge Caliber SUV, driven by Ayers, according to the release. Both men were entrapped and had to be extricated by Suffolk Fire & Rescue and EMS personnel. One man died at the scene, and the other was airlifted by Nightingale to Sentara Norfolk General Hospital, where he later died.