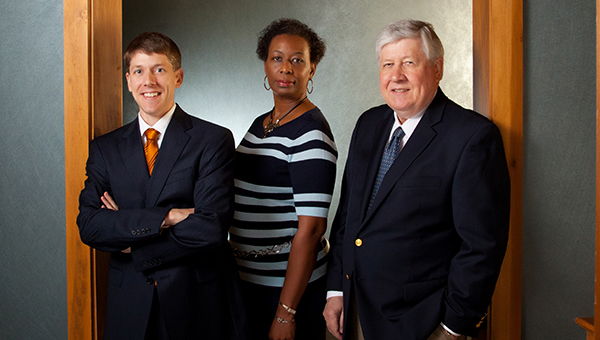 From left, Stephen Korving, Ella Bourne and Arie Korving are the three employees at Korving and Company, the Hampton Roads Chamber of Commerce’s Suffolk Small Business of the Year. (Submitted Photo)

Arie Korving says he was “absolutely dumbfounded” when he learned Korving and Company has been named the Suffolk Small Business of the Year by the Hampton Roads Chamber of Commerce.

The investment management firm will compete against the honorees from the four other South Hampton Roads cities to be named the Small Business of the Year at an awards luncheon on June 12.

“It was certainly unexpected,” Korving said of the honor.

The Korving and Company team is small but dynamic. Besides Arie Korving, it includes his son, Stephen Korving, and administrative manager Ella Bourne.

Arie Korving got into the business in 1986. He had been working for General Electric’s plant in North Suffolk, which closed after he left.

“I saw the handwriting on the wall,” Korving said. “I decided to go into the investment business.”

Korving joined a local firm, which went through several ownership changes over the years.

“I worked for a number of different companies, but I never left,” he likes to joke.

His son eventually joined him at that company, but they “decided it was better for us and for our clients if we left,” Arie Korving said. “Most of our clients joined us here.”

The company has existed for a little more than five years now. It helps its clients manage 401Ks, Individual Retirement Accounts, trusts and other investments.

Arie Korving said he enjoys his work because he gets to help people.

He has more freedom to help clients than a “big-box” investment firm, Korving said. He’s helped clients do everything from buy a car to decide which assisted-living facility to choose.

Another thing that’s helped his clients that he couldn’t do at a bigger firm is write his own book, Arie Korving said. His book and workbook help couples prepare for when one of them dies. It’s not only about financial matters but also about passwords to online accounts and friends that need to be notified.

Stephen Korving also said the business caters to what individual clients want out of their golden years.

“For each person, it’s a little bit different,” he said. “Some people want to travel all over the world; some just want to buy a beach house.”

The business also can help people climb out of debt as well as build wealth.

“We try not to take on too much of it,” Stephen Korving said. “The person on the other end needs to be equally invested. You’ve got to do what I tell you to do. But emotionally, it’s very rewarding to help people get out of the hole.”

When it comes to wealth-building and wealth management, it’s all about risk management, Stephen Korving added.

“We’re really wealth protectors,” he said. “Especially when you’re dealing with retirees, you can’t afford to try to beat the market.”

Arie Korving said it is possible for their clients to do what they do themselves, but it’s a lot like someone who’s not a mechanic trying to change their own oil.

“The thing about investing is you can do it yourself, but you have a real good chance of messing up,” he said.