With the end of the school year fast approaching, the president of Greater Oakland and Chuckatuck Civic League says the community needs a children’s playground. 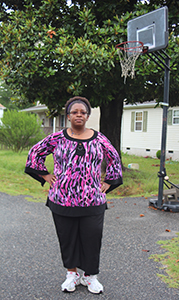 Opal McCleod, president of the Greater Oakland and Chuckatuck Civic League, has set up a basketball hoop in her driveway facing the street for children to use as they please. What the community really needs is a children’s playground, she says.

“We have a lot of young children; however there is not a play area,” Opal McCleod said. “We have tried unsuccessfully to get an area.”

There are few options open to children, and McCleod says none are safe or feasible.

The playground at Oakland Elementary School, as well as being set back a long way from the road, isn’t available until after 6 p.m. because Suffolk Parks and Recreation holds an after-school program there, she said.

It has also been suggested children can use the playground equipment inside Lone Star Lakes Park, but McCleod says it’s too remote and too difficult to supervise, not to mention it’s surrounded by lakes that could be dangerous for young children.

“Our kids are left to play on Birch Lane,” she said. “I turn the basketball hoop on my driveway around to face the street, even when I’m not here.”

McCleod said an offer of two basketball hoops has been made if the league or parents can find land to put them on. But finding that site is proving challenging.

McCleod has spoken to Kirk Dice, lead minister of Celebration Church, about locating a playground on land the church owns on Godwin Boulevard where it plans to eventually construct its own church. The congregation currently meets at Suffolk Family YMCA.

Dice said the church is on board with the idea of a playground that’s open to the community on its land.

“It thought it would be a great partnership with the community,” he said.

But there’s a hitch.

“The plan we submitted for the church building has to be built first,” Dice said.

That’s standard practice, he added, and Celebration hasn’t yet been able to marshal the required resources of a minimum $2 million.

“We can’t build smaller without going through the whole (approval) process again,” he said.

Meanwhile, kids in the wider Oakland/Chuckatuck community just have to make do. McCleod said she has received phone calls from the village Post Office about kids skateboarding there.

“I ask them, ‘What other option do they have?’” she said.