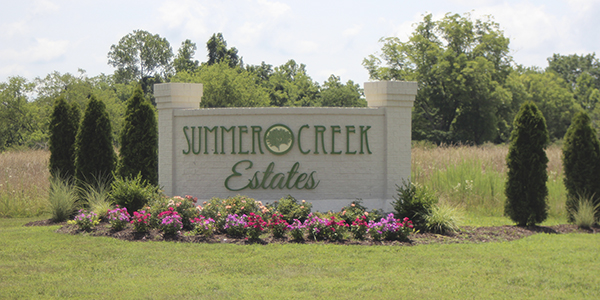 Near the northern approach of the former Kings Highway Bridge — a place that gets little traffic since the bridge was removed — is Summer Creek Estates, a 55-lot “rural living” housing development ramping back up after having been dormant for years.

It was envisioned as a high-end neighborhood allowing room to move without the isolation rural living can bring.

Roughly opposite St. John’s Episcopal Church on King’s Highway in Chuckatuck, it’s not far from where the highway ends now, after the bridge to Driver closed in 2005 and was removed a couple of years later.

What’s now called Summer Creek Estates fizzled — it was dormant for years. But now it’s ramping up again, with a new developer marketing the project to families as an affordable rural-living option.

According to Steve Freeman, real estate site manager for Wirth Development Corp., The Harbor Group, which brought Wirth on as its primary builder, bought the development in 2013 after it went into foreclosure.

The Harbor Group is a real estate investment firm historically focused on commercial projects but now dabbling in residential as well, Freeman said.

“The project was started by a different developer,” Freeman said. “Their plan was rather grandiose, with one-million-dollar homes all on three-acre lots.”

Two things killed the project, according to Freeman: the Great Recession, and the closure of the Kings Highway Bridge.

“Those two events coupled together drove the developer out of business,” he said.

The Harbor Group hasn’t sought to alter to the neighborhood’s approved plans, Freeman said: The 55 lots are still a minimum three acres in size.

About 17 lots are waterfront, he said. Four were built on and sold before the project was taken over, Wirth Development has sold seven homes since it started in late 2013, and another builder has sold one home and is building two more, Freeman added.

Shared facilities include walking trails with fitness stations, a playground, and a pier where residents can launch canoes and kayaks.

Freeman said the momentum is starting to build. “Word of mouth is building,” he said, adding the model home will be staffed seven days a week.

A grand opening is scheduled for July 8.

“It’s the only subdivision in Suffolk offering three-acre lots,” Freeman said. “One of the great appeals of the neighborhood is it’s an actual neighborhood, and you get acreage.

“Typically in Suffolk, when you buy acreage you are out in the country and living by yourself. The spacing on the housing is very attractive — you are definitely not crammed up next to your neighbors.”