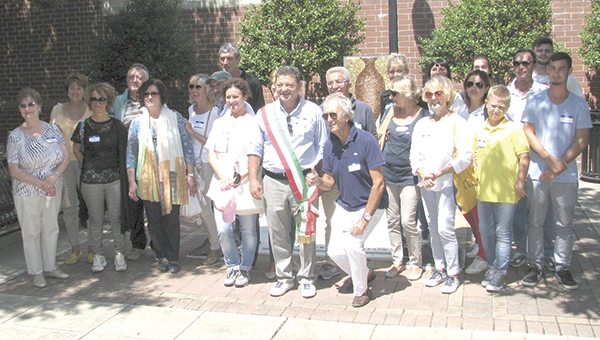 Members of the exchange group from Oderzo, Italy, and the surrounding areas pause their downtown tour on Thursday for a photo in front of the Obici-Oderzo Fountain near the Godwin Courts Building.

A group of 26 Italians and their American hosts toured Suffolk on Thursday, stopping at several sites pertinent to the multi-faceted relationship between Suffolk and Italy.

The trip was sponsored by Suffolk Sister Cities, which has sibling relationship with Oderzo, Italy. It is the town from which Amedeo Obici — Planters Peanuts founder, hospital founder and Suffolk beneficiary — hailed as a young boy.

Obici immigrated to Pennsylvania before settling in Suffolk to be closer to the producers of his product. He later would found the Louise Obici Memorial Hospital, now Sentara Obici Hospital, in memory of his wife. The couple are interred at the hospital. Proceeds from his estate now fund grants from the Obici Healthcare Foundation.

“It’s a way of keeping Amedeo Obici’s legacy alive, by doing these exchanges,” said Susan Blair, who is coordinating the group’s visit.

After arriving on Wednesday evening, the group spent Thursday morning touring the Italian-based Massimo Zanetti Beverage Company’s plant on Progress Road. They then visited the hospital, toured downtown and visited the Obici-Oderzo Fountain near the courthouse, which was designed by an Oderzo architect. Most of the group stopped in at Amici’s for espresso, and then they went to visit the Obici Healthcare Foundation’s headquarters.

Visiting Suffolk for the seventh time was Ermes Campigotto, who is a public official in Oderzo.

“He feels like it’s his home here,” said Nicoletta Dalla Pozzo, translating for Campigotto. “He organized the Italian delegation coming to Suffolk due to his very deep friendship.”

Campigotto stays with Blair and her husband every year, he said.

On Friday, the group will visit Norfolk, followed by Smithfield on Saturday. On Sunday, they will have dinner at the Obici House, where the Obicis lived, with city officials. Next week, they will see Washington, D.C., and Boston before returning home.

For Massimo Sensini, who is the mayor of a small town south of Oderzo called Fossalta di Piave, it was his first time in North America.

“One day is not enough,” he said when asked his impression of Suffolk. But he did call the city “very, very fine; beautiful” and said his hosts “have a great sense of hospitality.”

He learned about the story of Obici’s connection with Suffolk two years ago and told a friend he was interested in coming to see Suffolk, he said.

“I think it’s important for us to show people and the world this is who Americans are,” said Maryanne Persons of Suffolk Sister Cities. “It’s also about relationships. Some of these people didn’t necessarily know each other when they came on this trip together. I think Obici was practicing it before it was called citizen diplomacy.”