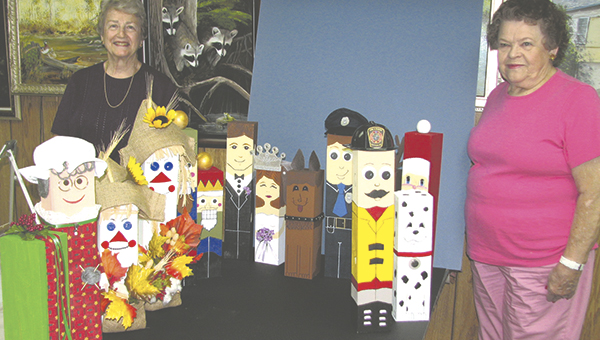 Roberta Powell, left, and Fan Panton of the Pilot Club of Suffolk show off the painted and decorated “porch sitters” that will be up for grabs at the Queen’s Banquet on Oct. 1.

About three weeks remain for folks to purchase their tickets for the Suffolk Peanut Fest Queen’s Banquet.

The pre-festival event is set for Oct. 1, one week prior to the first day of the festival. Ten young ladies — two from each public and private high school in Suffolk — will be presented, and one will be named the Peanut Queen.

This year’s master of ceremonies — Lt. Joe Kenda of Investigation Discovery’s “Homicide Hunter” show — should be a draw all on his own, said Roberta Powell of the Pilot Club of Suffolk, which holds the event as a fundraiser.

New this year, the queen will not be named until during the banquet, Powell said. In previous years, the court has been told beforehand.

A Peanut Fest Queen has been honored at every Peanut Festival since 1941. In recent years, the queen has been chosen from among the local high schools based on academic achievement, volunteerism and an essay on this year’s festival theme.

The queen and her court will have several official duties, including appearing in the Peanut Fest parade and participating in the popular peanut butter sculpture contest on Saturday during the festival, which runs from Oct. 8-11 at the Suffolk Executive Airport.

This is the second year the event is being held as an evening banquet, rather than a luncheon. It will take place at 6 p.m. at the Hilton Garden Inn Suffolk Riverfront, 100 E. Constance Road.

Tickets are on sale now for $30 at Holland’s Produce, D.B. Bowles Jewelers and the Suffolk Visitor Center. No tickets will be sold at the door, Powell said.

A silent auction also will be part of the event. Centerpiece “porch sitters,” painted and decorated by members of the club and other community members, also will be up for grabs.

Proceeds from the event go to a variety of local charities supported by the Pilot Club, whose mission is to prevent and bring awareness to injuries, diseases and disorders of the brain. Among organizations it supports are Suffolk Project Lifesaver, which provides tracking devices to those with conditions that make them prone to wandering; the Alzheimer’s Association; the American Cancer Society; the Suffolk Literacy Council; the Salvation Army; and more.