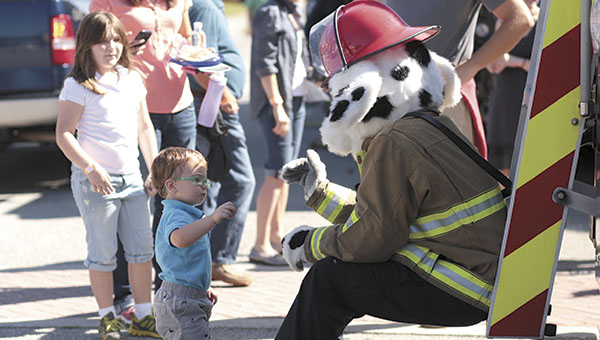 Sparky the Fire Dog shows off a fire engine to young children at last year’s Touch a Truck, Train and More event at the Suffolk Seaboard Station Railroad Museum. This year’s event will be next Saturday.

The weekend of Oct. 3-4 promises to be the busiest of all the busy autumn weekends this year.

Five big events will take place in downtown Suffolk, and three of them will share the Constant’s Wharf Park venue and equipment during different times of the weekend.

Bright and early on that Saturday will be the Suffolk on the Move 5K, the fifth annual fall 5K.

The run will start at Constant’s Wharf, 100 E. Constance Road, and go 3.1 miles before winding up back at the wharf.

“This is a great way to do a starter 5K,” said Mike Frickanisce, who works for Suffolk Parks and Recreation, which partners with Suffolk on the Move, which is a program of Healthy People Healthy Suffolk and the Suffolk Partnership for a Healthy Community. “Because it’s not timed, usually it’s a little more appealing to people who are beginners to running or the fitness lifestyle.”

Frickanisce said 300 to 400 people usually attend the event, which also includes a one-mile walking course. Having it the weekend before Peanut Fest makes it a little more of a festive atmosphere, he said.

The run is free, but registration is required by Sept. 30. No awards for finishing time will be given, but door prizes will be. Warm-up begins at 7 a.m., with the run/walk at 7:30.

“It’s a great opportunity for anybody that’s interested and looking for a way to move their body,” he said.

Registration for the race can be accomplished at www.suffolkpartnership.org.

After the 5K comes the perennial favorite Peanut Festival parade through downtown, which will begin at 10 a.m.

After the parade is another event that is becoming a favorite — the Suffolk-Nansemond Historical Society’s Touch-a-Truck, taking place at 326 N. Main St.

“It’s right after the Peanut Fest parade so people can just walk down the street and come to Touch-a-Truck,” said Barbara McPhail, who is on the society’s train station committee and Touch-a-Truck committee.

The event will allow kids to get up close and personal with emergency services vehicles, farm equipment, construction equipment and the train caboose that rests at the station permanently. The Port of Virginia’s Regional Command Bus will also be on hand.

“That is a really cool thing we’re getting this year that we’ve never had before,” McPhail said.

A sandbox with toy trucks, complimentary water and popcorn and more will be at Touch-a-Truck.

The event is the major fundraiser of the year for the Suffolk Seaboard Station Railroad Museum, which is owned and operated by the historical society.

“It’s how we keep the train station open, literally,” McPhail said. “We count on this to keep things moving there.”

Tickets are $5 each or four for $15. They can be purchased in advance at the train station or on the day of the event.

Oysters, barbecue and more are on the menu for the event, which supports the Suffolk Unit’s programs and activities.

The size of the club has more than doubled in the last six years, McPhail added.

The club provides a save haven to children whose parents cannot be at home when they get out of school. A snack, homework help, and a variety of programs encouraging development in things like the arts, sports, character development, education and career options and more are offered at the club.

“There are people out there that might think the kids come and we roll outthe basketballs, and that’s just not it at all,” McPhail said.

Lipton also will celebrate the plant’s 60th anniversary in Suffolk and the 125th anniversary as a brand, as well as the near-completion of an expansion and upgrade project, on Sunday, Oct. 4.

From 10 a.m. to noon, the company will give tours of its plant to employees and their families as well as retirees, plant manager Bill Kelly said.

“They’re all dying to see the new factory,” Kelly said of local retirees he runs into in the community.

The facility is nearing the end of a $96 million expansion project that included new processing equipment.

The public portion of the event takes place from 2 to 7 p.m. Sunday at Constant’s Wharf. A cornhole tournament will begin at 2:30, and entertainment and food will be available throughout the event.

“We’re really keen on the town celebrating with us,” Kelly said. “We consider ourselves to be a big part of the community.”