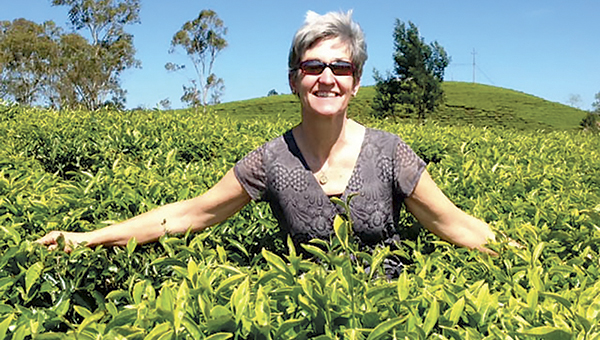 Suffolk farmer Shelley Barlow stands in a field of tea leaves in Vietnam. The trip was part of VALOR, an agricultural leadership program offered through Virginia Tech. (Submitted Photo)

While at a farmers market in Vietnam, Shelley Barlow passed on the offer to taste snake wine, a rice wine in which a cobra — drained of its venom — had fermented for months.

But the Suffolk farmer rode a water buffalo; toured rice paddies, a duck farm and dairy; made spring rolls after touring a rice paper factory; and helped an elderly Vietnamese woman weed and transplant herbs.

Barlow is one of a dozen participants in a two-year Virginia Tech leadership program, VALOR, who went to Vietnam from Jan. 8-20. VALOR is an acronym for Virginia Agriculture Leaders Obtaining Results.

According to VALOR’s website, the program is designed to develop advocates for Virginia’s agricultural industry. Participants strengthen their communication, problem solving, and critical thinking skills and learn more about agriculture from the global and local perspectives.

The trip to Vietnam caps off more than a year of weekend seminars and workshops that have taken Barlow to agriculture-related businesses across Virginia and beyond: A dairy farm in Harrisonburg. Mobile farmers markets in Northern Virginia. An oyster company on the Northern Neck. A sugar cane ranch in Florida. Washington, D.C., to meet with lawmakers who create legislation and set policies about agricultural legislation.

The trip to Vietnam was a rare opportunity to see agriculture — and Vietnam, a communist country — from a unique perspective, according to Barlow.

While police are visible around the country, Vietnam appears to follow few zoning ordinances or regulations and traffic laws, Barlow said.

Traffic was chaotic, with bicycles and mopeds hauling families, a bull or stuffed carts zipping around occasional cars and pedestrians, Barlow said.

“Everyone was selling something,” Barlow said. People set up shops in their front yards or on the first floor of their homes to sell trinkets, produce, meats and the like, she said.

“There were no established commercial districts, everything was all jumbled together and … cows were tied up in backyards,” Barlow said.

Although facilities are not comparable to the United States, the agricultural research under way in Vietnam aligns with what is being studied here, she said.

The most challenging part of the trip was going to the sites like the War Remnants Museum and the Cu Chi tunnels, Barlow said. Those sites highlight the Vietcong’s efforts to fight the Americans during the Vietnam War.

“Half of Vietnam population is under 30 and they don’t remember the war,” she said. “They still hear propaganda but they also have the Internet and television.

“That generation views the war as a historical thing.”