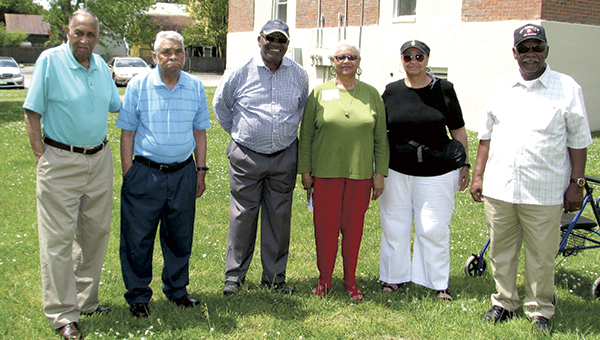 Several graduates of Booker T. Washington High School and Councilman Curtis Milteer, second from left, stand near the spot where a marker will be placed this year to commemorate the school’s history. From left are George Richards, class of 1940; Milteer; Ron Hart, class of 1960; Julia Bradley, class of 1956; and Hattie and Willie Lyons, class of 1959.

A state historical marker recently approved by the Virginia Department of Historic Resources will inform passersby of the history of Booker T. Washington High School.

The school’s alumni association spearheaded the effort to have the marker approved and is paying for its manufacture and installation. The move was approved at the association’s meeting last summer.

“They voted then to go forward with paying for it and having it installed,” said Julia Bradley, the historic marker project chairman. She graduated from the school in 1956.

The marker will be placed at 201 Lee Street, between two buildings that both were known as Booker T. Washington at one point. Both are now part of the Jefferson Manor Apartments.

One building was constructed in 1913 and was known as Booker T. Washington Junior High School. It went up to eighth grade, Bradley said.

In 1925, a neighboring building was constructed, and the school moved there. The first building became Andrew J. Brown Elementary School, named after one of Booker T. Washington’s first principals.

The new building served as a high school until 1953, when Booker T. Washington High School moved to Walnut Street.

“We were bigtime then,” Bradley said.

That building became an intermediate school after the last graduating class in 1969, and the building now serves as an elementary school.

The full text of the marker will read:

“The Suffolk School Board opened Booker T. Washington School here in 1913 to serve African American children in grades 1-8. Ninth grade was added during the 1920s. Overcrowding prompted the construction of a larger building here in 1925. Black residents successfully campaigned for the addition of a senior high curriculum, and the first high school class graduated in 1937. Administrator J.F. Peele Jr. provided leadership for four decades. Again overcrowded, the school relocated to a new building one and a half miles east in 1953. The last high school class graduated in 1969. Washington became an intermediate school and later an elementary school.”