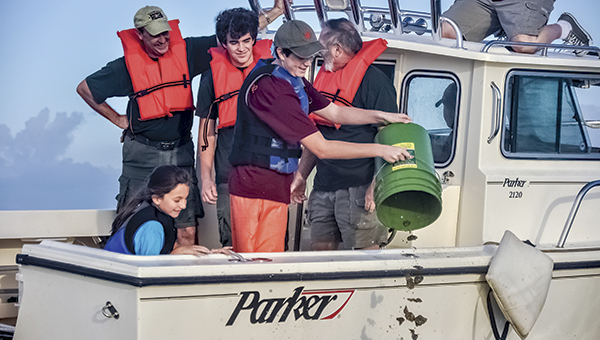 Cameron Bruce, surrounded by family and friends who helped with his Eagle project, drops oysters onto a protected reef in the Elizabeth River.

The Elizabeth River is a little cleaner today, thanks to Cameron Bruce.

For his Eagle service project, Bruce grew oysters in 17 floating cages in the Waterview community, ultimately transferring more than 2,400 fully grown oysters to a “sanctuary reef” that is protected and maintained by the Virginia Marine Resources Commission. Bruce coordinated the project, raising $1,500 to fund it and recruiting four dozen volunteers — mostly fellow Scouts and family members — who logged a total of 415 hours.

Bruce blogged about his progress throughout the project; a link is available at waterviewgrowsoysters.blogspot.com.

Although he now lives in Suffolk, Bruce is an Eagle Scout in Portsmouth’s Boy Scout Troop 207. 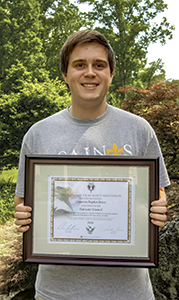 Cameron Bruce holds up a plaque he received recently honoring his work with oyster restoration in the Elizabeth River.

Last Thursday, he was recognized as the Boy Scouts Tidewater Council’s honoree for the 2016 Glen A. and Melinda W. Adams Eagle Scout Project of the Year Award. The award is given to one Scout per council nationwide, making him one of only 90 Scouts nationwide to receive the recognition.

Bruce, who grew up playing in the Elizabeth River, said he chose the project because of its lasting environmental impact.

Every oyster filters about 60 gallons of water daily, and each female oyster can produce up to 1,000 offspring, according to the Chesapeake Bay Foundation.

“One reason I chose this project is because it is so infinite,” Bruce said. “It will never fully dissipate, so it will always have an impact on the river.

“I like the idea of knowing that I have made a difference to the Elizabeth River.”

The project got off the ground in April 2014, when Bruce and his volunteers built 19 floating cages from plastic PVC pipes and wire mesh that would hang off his neighbors’ piers, submerged in the river all summer.

He started with 17,000 seed oysters to place in the cages. Every two weeks, Bruce said, volunteers would go out and check on the oysters, cleaning any algae and removing any crabs that might have attached to the cage.

In the fall, when the oysters were large enough to survive on their own, they were transplanted to the VMRC’s permanent reef near the West Norfolk Bridge.

“It makes me feel good to have such an impact on the environment,” said Bruce. “Completing the project was an incredible feeling of accomplishment.”

A Suffolk man is dead following a Friday shooting in Newport News, according to a press release from the Newport... read more