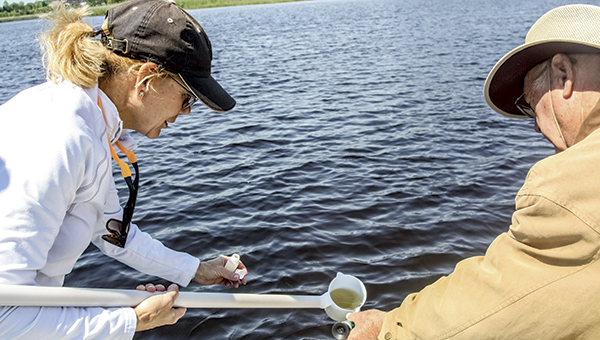 As the powerboat idles in the water, the Nansemond River Preservation Alliance volunteers start hustling.

Volunteer Brian Martin and Elizabeth Taraski, the organization’s executive director, fill a small plastic container with water from the Nansemond River and use a refractometer  — a digital device that measure salinity — to test a water sample. The bottled sample will be used to check the water’s bacteria levels.

After Taraski records the information, it’s on to the next stop along the Nansemond River. 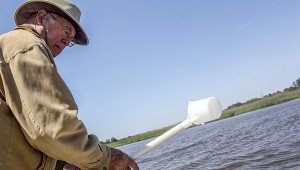 Each month, the group runs the tests at nine sites along the river, beginning at the mouth in North Suffolk and ending at the Hilton Garden Inn in downtown Suffolk.

Once all the tests are done, Taraski uploads the results into Virginia Department of Environmental Quality’s database.

The DEQ relies heavily on citizen monitoring around the state to help maintain and improve the health of the state’s waterways, according to the DEQ’s website.

The DEQ looks at the data to identify any hotspots that need to be monitored more closely, Taraski said. The DEQ, the Virginia Department of Health and the city’s Public Works department also routinely test water samples from the Nansemond.

The Nansemond River’s health has been declining for years, evident by the state health department’s condemnation of more than 1,000 acres of the river for shellfish harvesting because of high bacteria levels. All of Bennett’s Creek and Knott’s Creek are also closed. The VDH looks at 30 months of test data to make its decisions.

The alliance analyzes the information it collects to produce a report on the status of Nansemond River every two years, Taraski said.

“It’s an educational tool,” Taraski said. “I also think it encourages and inspires people to implement best practices when it comes to protecting our river.”

“We all want to do everything we can to restore the waterway to full health,” Taraski said. “We are talking about ways we can all work together to identify the undefined source of bacteria.”

Carrollton Elementary School is one of 166 schools statewide — and one of only two in Western Tidewater — to... read more