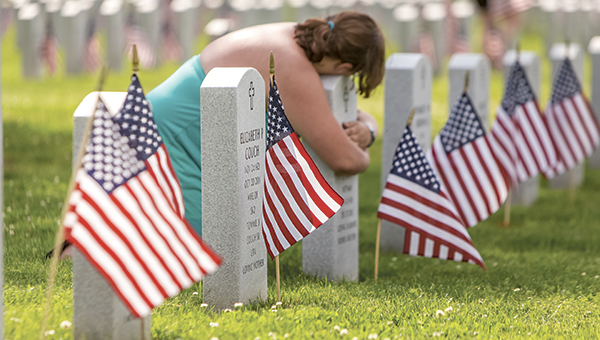 Kayla Osiecki of Suffolk takes a moment to grieve at the grave of her grandfather, a U.S. Navy veteran who died in 2011. Kayla and her mother helped place the thousands of flags that stand in front of the gravesites at the cemetery this weekend.

With the afternoon sun blazing down upon them, dozens of volunteers strolled between grave markers at the Albert G. Horton Jr. Memorial Veterans Cemetery on Friday, placing thousands of flags in preparation for Monday’s Memorial Day observance.

The annual volunteer effort paints the veterans cemetery with the Stars and Stripes and prepares it to host hundreds of visitors during the special Memorial Day ceremony.

Struggling to get a flag into a pre-drilled hole in the ground in front of a grave marker in one of the cemetery’s older sections, Dorothy Cogswell of Suffolk described the sense of duty that drew her and several family members to the Horton cemetery on Friday. 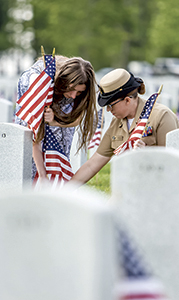 U.S. Navy Chief Fire Controlman Sharon Heisler of Suffolk kneels with her daughter, Christine Clark, in front of a grave marker at the Albert G. Horton Jr. Memorial Veterans Cemetery on Friday. They were two of the dozens of volunteers that helped place flags for Monday’s Memorial Day ceremony there.

“We’re a military family,” she said, noting that her husband is a retired U.S. Marine. The couple expects one day to be buried at Horton, so these events are especially significant to them, she said.

The Cogswells’ grandson and daughter were also on hand to help set flags, and Mrs. Cogswell said the family also helps lay wreaths at the cemetery during the Christmas season.

Nearby, Tom Patrick, treasurer of the Bethlehem Ruritan Club, held an armload of flags and directed his grandson, Ethan Adams, to a grave marker that had been skipped by the crowd that had moved through the cemetery ahead of them.

A Vietnam veteran, Patrick recalled when a fellow Ruritan had come to the club members not long after the 73-acre cemetery opened in 2004 and said the organization had “a chance to get in on the ground floor” of the effort to provide flags for the graves for Memorial Day.

Today the Bethlehem club and other Ruritan clubs from around the area continue to fund the purchase of flags, according to Chris Calhoun, a cemetery employee who thanked volunteers and gave them some direction before sending them out to empty the plastic tubs full of flags that had been distributed throughout the facility.

On Monday, the Horton cemetery will host its Memorial Day ceremony at 10 a.m. The guest speaker is Gerald Rhoads, a member of American Legion Post 88, which sponsors the event.

Suffolk’s Memorial Day observances start on Saturday, though, with the Suffolk Chapter 173 United Daughters of the Confederacy holding its annual Cedar Hill Cemetery ceremony at 10 a.m. Dr. Brian Steel Wills will be the guest speaker. He is director of the Center for the Study of the Civil War Era and professor of history at Kennesaw State University in Georgia.