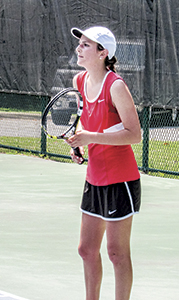 The Lady Warriors’ tennis team has exceeded expectations by winning in the regional semifinals. With this victory, the team has placed itself in the school history books.

Coach James Riley said this is the best team he has ever coached.

“From the beginning of the season, they have gone further than any expectation I have ever had,” said Riley. “Winning today puts us in the state championship tournament for the first time in school history.”

The Lady Warriors won against Hickory High School on Wednesday in the 5A South region quarterfinals 5-0. They had beaten Hickory before in the regular season.

“Hickory was our turning point during the regular season,” Riley said. “I told the girls this is our make or break match this week against Hickory. If we can beat Hickory, we can make it to the regionals this year.”

The Lady Warriors beat Hickory in the regular season and gained momentum as well as confidence going forward. Beating them again was exciting, but the team wanted more.

Against Princess Anne, the Lady Warriors took it one point at a time, a motto that Riley has instilled in his players since the beginning of regionals. It is this message that has enabled the girls to focus and not get caught up in their own hype.

“I told the girls, ‘I’m going to say one word, and that’s “One,” one point at a time, one game at a time, one set at a time and one match at a time,’” said Riley. “If we can do that, we will continue to have success.”

The Lady Warriors are now 16-1 heading into their first state championship tournament. Riley knows the difficulty that lies ahead, saying his team is going to face other teams like them.

“Now that we are coming down to the final four teams in the state, we are going to face other teams that have done the same thing we’ve done all season,” Riley said.

The Lady Warriors are enthused to be playing at such a high level and Riley is excited for them as well.

“As long as they play to the best of their ability, I’m going to be happy no matter what the result is,” Riley said. “If they come to play their game, I have a feeling that in a couple of weeks, we could be sitting in the state championship match.”