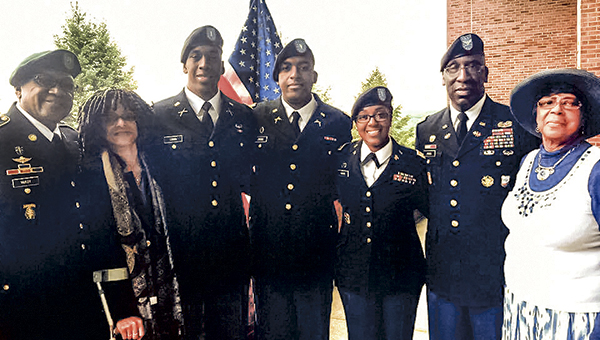 Cross, 23, is one of 953 newly commissioned officers who graduated in West Point’s Class of 2016. In a few weeks, Cross — a 2012 graduate of Nansemond River High School — heads to Fort Benning, Ga., for the Army’s infantry basic officer leadership course, followed by Ranger school.

“It was a struggle at times and I had to stay committed … but I did it,” said Cross, relaxing outside his family’s home off Bennetts Pasture Road on Friday. “After the past four years, I’m looking forward to new experiences and mentors.”

Giant red, white and blue stars and American flags are planted around the family’s front yard, a tribute to Cornith’s achievement.

He comes from a family steeped in military service, following in the footsteps of his two siblings, father and grandfather.

“We grew up in the military,” said Cornith, who became serious about attending West Point as a freshman at Nansemond River. “I’m not sure I had a real choice not to go into the military.”

“I couldn’t be prouder to have Cornith in the family business,” said retired Army Sgt. Major Sam McKoy, who is Cornith’s grandfather.

His father, retired Col. Frederick A. Cross, spent 30 years in the Army before retiring in 2011. During his career, Cross and his wife, Angela, moved their family 18 times, with stints in Texas, Pennsylvania, California, Georgia, Germany and South Korea.

Cornith’s older brother, 2nd Lt. Geordan Cross, 23, serves in the Virginia National Guard. A 2011 graduate of Nansemond River and a 2015 graduate of the University of Virginia’s College at Wise, Geordan served in the Army ROTC throughout college. He earned a degree in criminal justice and plans to join the Virginia State Police.

Their older sister, U.S. Army 1st Lt. Triada Cross, graduated from West Point in 2013. She flew in from Fort Hood, Texas, Friday for the family festivities.

While celebrating graduation, Fred Cross says his family will also pay tribute to service members who died while serving their country.

“It’s close and personal for us,” he said. “We know people who have given the ultimate sacrifice. We will not forget them.”

He said he was glad his children chose to forge paths in the military.

“They are heading for a lifetime of excitement, leadership and honor,” he said. “I’m proud of them.”

A man escaped his car after finding himself in a retention pond off U.S. Route 58 on Saturday. Suffolk Police... read more