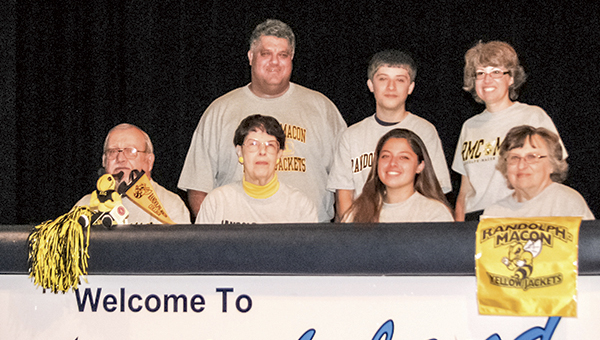 Ariel Salerno, seated second from right, celebrates signing to Randolph-Macon College at Lakeland High School on Monday. With her in the front row are grandparents Robert Joyner, Mary Joyner and Ann Felton. Behind them are Ariel’s parents, David and Angela, and brother, Benji.

Salerno recently signed a letter of intent to attend Randolph-Macon and join the field hockey team. She received a full-tuition academic scholarship through a program for future teachers.

“I really like it,” Salerno said of Randolph-Macon. “It’s a small college, but it still has all the experiences you can have at a big college.”

However, her first and greatest love is field hockey.

Salerno went out for field hockey in eighth grade, when she heard an announcement for an interest meeting made at her middle school.

“It really helped it was during math class, so I got to skip math class,” she joked.

That fortuitous chance helped her discover the sport that would take her to Randolph-Macon. She’s been coached at Lakeland by Tara Worley and Cortney Parker.

“She has done many things to put Lakeland on the map this year,” said Lakeland activities director Gregory Rountree. “You know who the winners are, because they’re working when nobody is looking. She’s a winner.”

Virginia Wesleyan College, Christopher Newport University and Middlebury College in Vermont were among some of the other colleges interested in Salerno’s skills in the field hockey goal. But she ultimately chose to stay close to home — at least, closer than Vermont.

“It’s just been an incredible process,” said her father, David Salerno. “We are so proud of Ariel. She has worked so hard for everything she has accomplished.”

In addition to playing for the Lady Cavaliers, Salerno has played year-around for a travel club team, Saints Hockey Rocks, based in Virginia Beach. The team has ranked in the top three in the nation in both U16 and U19 divisions.

“I would like to say a special thank you to Scotty Tyson, her Saints Hockey Rocks Field Hockey Club coach,” said Salerno’s mother, Angela Salerno. “He was the coach who was always there giving her lots of field hockey experiences, coaching and positive feedback.”

At Randolph-Macon, she will play for coach Jessica Weiss, who was a former goalie coach at Christopher Newport University and helped train Salerno at clinics when she first started playing field hockey.

“I know her, she knows me, and I know she’ll push me,” Salerno said.

Salerno succeeds off the field, as well. She is third in her class with a 4.3 grade point average and participates heavily in Girl Scouts.

She aims to be a chemistry teacher, she said. She enjoys the predictability of chemistry.

“It’s fun to see the reactions and know if you do this and do this, this is how it will work out,” she said.

She competed for the highly selective Noyce Teacher Program at Randolph-Macon, a grant funded through the National Science Foundation. In exchange for the full-tuition grant, she has committed to teach four out of the eight years following graduation in a high-need school district.

She has also received the Federal TEACH Grant and a number of other scholarships.