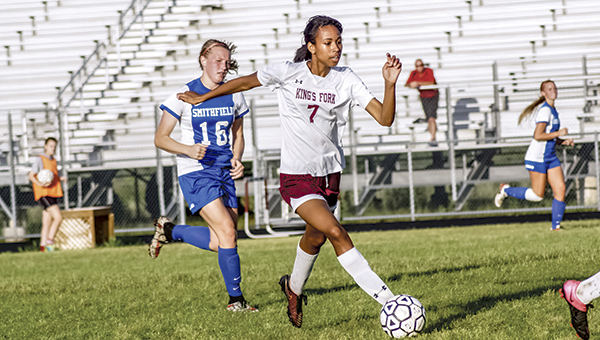 With the win, the Lady Bulldogs advance to the semifinals of the regional tournament. The game started off slow for King’s Fork, enabling Smithfield to jump out to an early lead.

“We were very sluggish and unorganized right out of the opening kickoff, and we gave up a very bad goal to go down 1-0,” coach Mike Marston said. “From that point on, the players got into each other a little bit and started communicating, allowing us to pretty much dominate the rest of the game.”

Marston said the standout player of the game was Logan Montel, who scored a hat trick for the Lady Bulldogs. Alyssa Vick assisted the first goal, and Rebecca Washburn assisted the second. The third goal was a penalty kick drawn by Cydney Nichols, which made it the third game in a row she’s done so.

The victory broke school records for the Lady Bulldogs.

Coach Marston realizes that the weather has pushed back some of the games, and perhaps that’s one of the reasons for the girls’ slow start.

“Coming into the holiday season and being rained out the day before, took the girls a little while to really get mentally in the game,” Marston said. “We cannot afford the rest of the way not to be mentally sharp.”

King’s Fork’s next game is against Courtland High School in Spotsylvania on June 1.