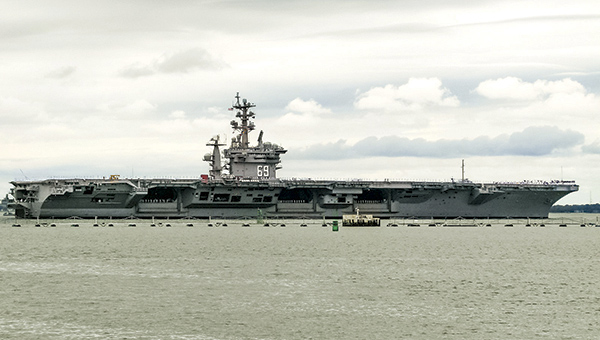 Several Suffolk sailors were among approximately 7,000 who departed Naval Station Norfolk on Wednesday aboard the USS Dwight D. Eisenhower and other ships in Carrier Strike Group 10.

The strike group will conduct a seven-month deployment to relieve the Harry S. Truman Strike Group in the U.S. Fifth and Sixth Fleet areas of responsibility. It will support air strikes against ISIS in addition to other duties, said Admiral Philip S. Davidson, commander of U.S. Fleet Forces Command. 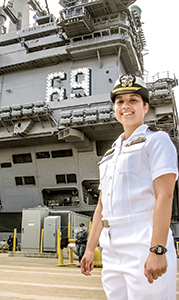 Lt. Kristina Fontenot, a Suffolk resident and Nansemond River High School graduate, takes a moment on the pier to pose for a photo before deployment.

One Suffolk sailor on board is only 26 years old, but she has grown up around the Navy.

“I’m a Navy brat,” Lt. Kristina Fontenot said. She has lived in Suffolk since 2002, when her family moved here while her father was on active duty.

Her mother and sister dropped her off at the pier earlier this week.

“This is not their first rodeo,” she said. “You have to wipe the tears and be ready to accomplish the mission on my end, and they’re ready to support me.”

Fontenot is the deputy public affairs officer for Carrier Strike Group 10. She works with American and international media covering the group’s activities and also edits the products of Navy journalists and photographers.

Fontenot graduated from Nansemond River High School in 2007. She said she regularly spots fellow Warrior graduates around the ship.

“It’s nice to see a familiar face,” she said.

The damage controlman said farewell to his wife, Yvonne, 1-year-old daughter, Makayla, and sister, Tonjanieka, a Suffolk resident, on the pier. This is his second deployment, but the first one since his daughter was born. Yvonne Bullock is also active duty, and she looks ahead to a deployment in a few months. Grandma will watch Makayla during the overlap. 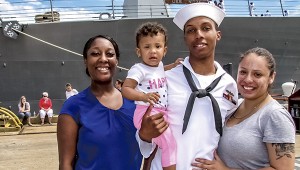 Suffolk resident Lindsey Day was among those waving farewell to the Eisenhower from the pier. Her new fiance, Jordan Alfman, was aboard.

Day has plenty to keep her busy during the deployment, including wedding planning and taking care of the couple’s dog.

Before the Nitze and Eisenhower got underway, Navy leadership held a ceremony to kick off the East Coast debut of the Navy’s Great Green Fleet initiative.

“Ike is now part of a new era of energy efficiency and operational effectiveness,” Davidson said.

He said it’s important for the Navy to keep pace with green initiatives, because its allies and the private sector are doing so. 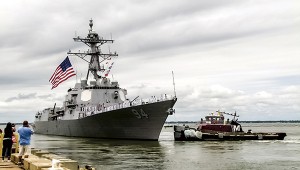 “The Navy is making a big attempt to be more environmentally conscious,” Fontenot said. She said some ships have switched to a different engine configuration that consumes less energy, and some others are operating on biofuel. Other changes like LED lights have been implemented.

Rear Adm. Jesse A. Wilson Jr. said the strike group has been training for this mission since he took over as commander on Dec. 1.

“There couldn’t be a more motivated team than the Ike Strike Group,” he said. “I have total confidence in our team, and we are ready to go forward.”

‘Strived to do my best’

Editor’s Note: This is the last in a series of stories on the valedictorians of the five high schools in... read more