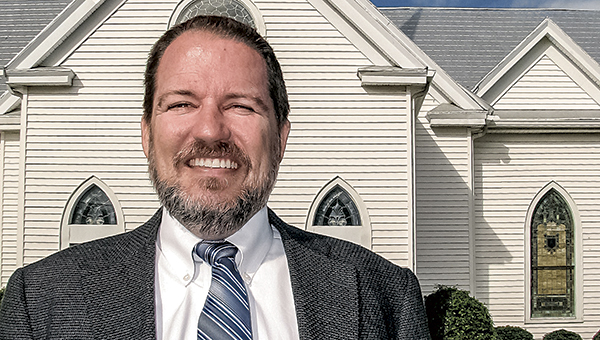 The Rev. Gregory Ryan stands in front of Oakland Christian United Church of Christ in 2013, shortly after he was officially installed as pastor. Ryan has been diagnosed with leukemia and is being treated at Duke University Hospital.

The Rev. Greg Ryan, pastor of Oakland Christian United Church of Christ in Chuckatuck, is fighting for his life.

Ryan, 53, remains in intensive care at Duke University Hospital, more than a week after being airlifted to Durham, N.C., from a Honolulu hospital, said his wife, Terry Schaefer Ryan.

Ryan was diagnosed with acute myeloid leukemia, a type of blood cancer, after becoming ill while the couple was vacationing on the Hawaiian island of Kauai last month.

Her husband didn’t feel well during the first week of their trip, said Schaefer Ryan. He went to a walk-in clinic after experiencing chest pains and breathing problems; from there, he was taken directly to a hospital on Kauai for additional testing.

He was then transferred to a larger medical center in Honolulu, where he was diagnosed with leukemia. The couple spent May 24 — their 18th anniversary — on a medical transport flight from Hawaii to Durham, where Ryan was admitted to Duke.

The $95,000 air ambulance flight was essential, in order for Ryan to undergo chemotherapy — an ongoing process that will take several months — closer to home, according to Denver oncology nurse Marla Mitchek Talmadge, who is also Ryan’s aunt. Ryan’s insurance will not cover the flight cost, because it wasn’t deemed a “medical necessity” since treatment was available in Hawaii, Schaefer Ryan said.

Talmadge has started a GoFundMe account to help cover the medical flight expenses, which the immediate family has already paid. According to the web page, all funds raised will be used to reimburse family members.

Ryan is sedated, still on a ventilator and has just finished an aggressive seven-day chemotherapy treatment that targets the cancer cells, Schaefer Ryan said. Once the treatment regimen is complete, doctors will do a bone marrow biopsy to determine if the cancer is in remission. He will then have maintenance chemotherapy for a year.

“It’s a helpless feeling, watching all of this unfold,” said Schaefer Ryan. “It’s been so helpful knowing there are so many people in prayerful and emotional support, sharing words of encouragement and concern for Greg and me.

“We feel protected … and we are very aware and grateful.”

Throughout the journey, from Kauai to Durham, Ryan’s fellow United Church of Christ ministers have reached out to them, she said. When they were in Kauai, Ryan asked his wife to call a local pastor from the denomination to come see him. He was at Ryan’s bedside in 15 minutes, Schaefer Ryan said.

When he was transferred to the larger Honolulu hospital, another local pastor was there with prayers and visits until Ryan’s transfer to Duke.

Since his arrival in Durham, several local United Church of Christ pastors — including the Rev. Dr. Edward Davis, head of the denomination’s Southern Conference — have spent time with Ryan.

“All of their presences have been reassuring,” Schaefer Ryan said. “He (Davis) is such a holy man. Greg had to have felt his presence.

“The fellowship among ministers is a big thing,” she said. “That’s always been important to him, and it’s very comforting to me.”

The community also has rallied around Ryan. Oakland Christian had a 12-hour community prayer vigil for Ryan on May 20, and every Sunday’s service since Ryan’s diagnosis has ended with a special prayer for him.

“All the support and prayers we have received have made such a difference,” Schaefer Ryan said. “I don’t have the words to express my gratitude.”

The unassuming chicken was the main topic of conversation during Wednesday’s City Council meeting. Roosters would not be allowed in... read more