Durwood V. Scott, principal broker and owner of Scott & Associates Inc., has received the Realtor’s Emeritus honor, recognizing his long membership in the National Association of Realtors and 40 years of contributions to the real estate profession. 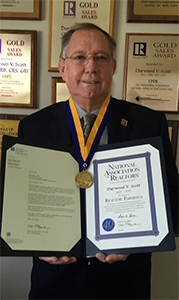 Durwood V. Scott shows off his Realtor Emeritus honor he received from the National Association of Realtors.

He has also been awarded the prestigious Omega Tau Rho Medallion of Service, a national award bestowed for his contributions to the association and service to the Realtor profession.

Induction into the Omega Tau Rho fraternity is granted by state and local associations to members and others who have shown exemplary dedication and service to the Realtor organization.

Membership in this honorary fraternity is represented by the Medallion of Service.

Scott has served on numerous local, state and national committees. He was licensed since 1971 and has been a broker since 1975.

Scott managed an office in Franklin from 1974 to 1976, when he joined Manry Rawls Realty as the co-owner broker and president. In 1981, he purchased the remaining stock from Manry Rawls and in 1982 changed the name to Scott & Associates Inc., Realtors.

Since joining the Realtors Association in 1979, Durwood has been a member of the Circle of Excellence (formerly the Million Dollar Sales Club). He has been Realtor of the Year twice, in 1982 and 1987 and Salesperson of the Year in 1983.

Scott was chosen Virginia State Land Realtor of the Year from the Realtors Land Institute and received the prestigious designation as accredited land consultant after serving as state president.

He has turned the management of his company over to his sons, Dale and Dane, who are vice-presidents and managing brokers. He remains president and principal broker.

Scott’s community involvement includes 44 consecutive years perfect attendance with the local Ruritan Club, and he has served on the zone and district levels and attended several national conventions in official capacities. Scott has also been active in church, serving as chairman and vice chairman on Board of Deacons, and as superintendent of Sunday school and on other committees.